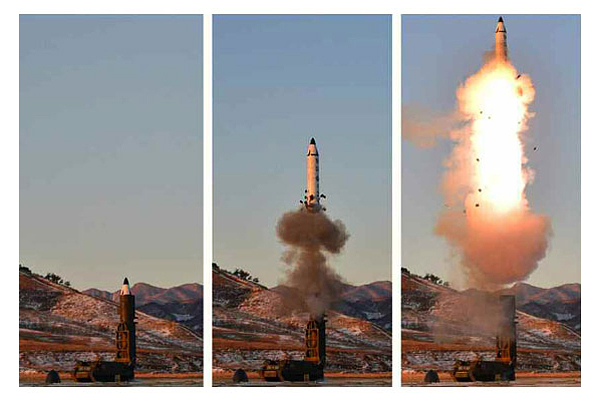 North Korea said Monday it successfully test-fired an intermediate-range ballistic missile capable of carrying a nuclear warhead, touting the launch of the Pukguksong-2 Sunday morning as an “absolute success” and a step toward the making of “another nuclear attack weapon.”

The announcement was Pyongyang’s first official reaction following the launch of its latest missile — the first this year and since U.S. President Donald Trump took office.

Pukguksong, which translates as North Star, was a nickname for North Korea’s late leader Kim Jong-il, whose death in December 2011 began the era of Kim Jong-un, his son and current leader.

Launched from Banghyon Air Base in North Pyongan Province at 7:55 a.m. Sunday, the missile reached an altitude of about 550 kilometers (342 miles) and flew 500 kilometers before splashing into the East Sea, according to the South Korean Joint Chiefs of Staff (JCS).

In a Monday news report carried by the North’s official mouthpiece, the state-run media outlet Korean Central News Agency (KCNA), Pyongyang claimed in a cheerful tone that the Pukguksong-2 missile was a “new surface-to-surface strategic weapon” which incorporated a “newly developed solid-fuel power engine” and fired from a “self-propelled launching truck.”

If the missile did in fact use solid-fuel instead of liquid fuel, it would represent significant progress for the North. According to descriptions from 38 North, a website on North Korean affairs, a missile that relies on a solid-fuel engine “would be more operationally robust, capable of being transported off-road without damage and launched on very short notice.”

The website continued that it could serve as a “stepping stone to the development of a solid-fuel intercontinental ballistic missile (ICBM).”

The North also claimed to have employed a sophisticated “cold-launching system” in its latest test-fire, which refers to a process that enables the engine to ignite in mid-flight as opposed to lighting up on the ground. It starts its flight through the use of compressed gas.

The JCS admitted that this method was used.

Pyongyang also claimed that the launch succeeded in using stage separation technology, which is vital for ICBM flights.

The Pukguksong-2 is said to be an enhanced version of the Pukguksong, a submarine-launched ballistic missile (SLBM) that North Korea test-fired Aug. 25, 2016. It flew 500 kilometers before falling into waters off its east coast. Local military experts conceded at that time it was a success because it flew more than 300 kilometers, the required length of a successful SLBM.

The JCS acknowledged in a press conference Monday that the North’s latest test was of a “new type of intermediate-range ballistic missile that used a solid-fuel propellant,” adding that the Pukguksong-2 was based on SLBM technology, incorporated a cold-launching system and was launched on a movable launch pad.

As to whether it was actually capable of carrying a miniaturized nuclear warhead as Pyongyang claims, the JCS said it would “need to check further.”

KCNA further quoted Kim Jong-un as saying that the successful launch on Sunday will be a “present of patriotism and loyalty” to his father, whose 75th birth anniversary falls this Thursday.

The message was a hint as to why the North chose this week for the launch. Pyongyang has a history of celebrating anniversaries with displays of its military prowess.

KCNA reported that Kim toured the test site and “personally chose the date of the test-fire,” encouraging scientists and technicians involved in the missile development that “it was time to show them, take a chance and push through with faith.”

The Pukguksong-2 missile system took only half a year to develop, the North boasted.

North Korea said that it intentionally test-fired the missile at a high angle “in consideration of neighboring countries,” implying it was technologically capable of firing the projectile longer than 500 kilometers.

The JCS expected it could fly about 2,500 to 3,000 kilometers, which would put South Korea, Japan, and Guam, which includes U.S. military bases, in its range.

Everything from the launch pad to the ballistic missile’s design, production and launch was “100 percent derived from our wisdom, our strength and our technology,” the regime asserted, despite sanctions by the international community.

“The test-launch was quite similar to the Pukguksong missile from last August,” said Kim Dong-yub, a professor at Kyungnam University’s Institute for Far Eastern Studies, who called the Pukguksong-2 missile a “surface-to-surface version” of the previous Pukguksong.

“But the Pukguksong missiles are no longer in the group of SLBMs. They’ve developed to a brand new type of group characterized by the use of solid-fuel engines.”

“Perhaps,” continued Kim, “Pukguksong-3 might turn out to be an ICBM.”