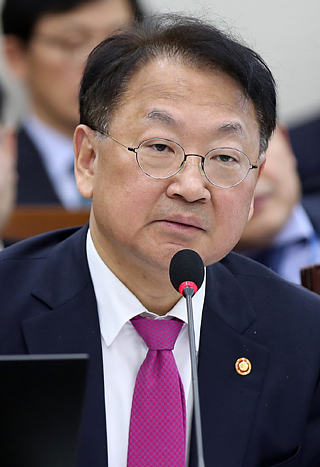 The Korean government is planning to arrange a separate bilateral meeting between the finance ministers of Korea and China next month, which will likely address issues such as the speculated backlash against Korean exports for Seoul’s decision to deploy the Terminal High Altitude Area Defense (Thaad) system.

The meeting is to take place during the G-20 finance ministers and central bank governors meeting, scheduled to be held in Baden-Baden, Germany, between March 17 and 18.

Deputy Prime Minister and Finance Minister Yoo Il-ho said Tuesday at the National Assembly that he will discuss the recent controversy over Thaad and its impact on Korean trade with his Chinese counterpart through an official meeting.

But he tried to downplay speculations connecting the recent decisions by the Chinese government, including the blocking of Korean cosmetics entering China, with the U.S. defense system deployment.

“It’s difficult to connect [the trade backlash and Thaad] with certainty,” the Korean Finance Minister said. “During last year’s bilateral finance minsters’ meeting, we agreed not to allow political issues to affect our economic relationship.”

Yoo, who took office a year ago, met with then-Chinese Finance Minister Lou Jiwei, who served since 2013, in Pudong during the G-20 finance minister and central governor meeting in Shanghai. However, this year his counterpart will be Xio Jie, a long-time bureaucrat and tax expert, who succeed Lou, an outspoken reformist, in November amid China’s slowing economic growth.

Since the Korean government accepted the deployment of the U.S. military defense system in July, tensions with China, Korea’s largest trading partner, have heightened.

There have been several actions that some in the market see as retaliatory, such as the Chinese government cancelling a substantial number of flights to Korea, especially charted flights. In fact, a report released last week by the Bank of Korea showed that the number of Chinese tourists traveling to Jeju Island has dropped 6.7 percent during the Lunar New Year holidays between Jan. 27 and Feb. 2 compared to a year ago, as a result of the reduced number of flights.

Last month, the Chinese government cut subsidies for eco-friendly vehicles, including electric vehicles, that installed batteries manufactured by Korean developers Samsung SDI and LG Chem. Initially, the vehicles were included among the 498 eligible for the subsidies, but a few hours after the announcement, five models using Samsung or LG batteries were excluded.