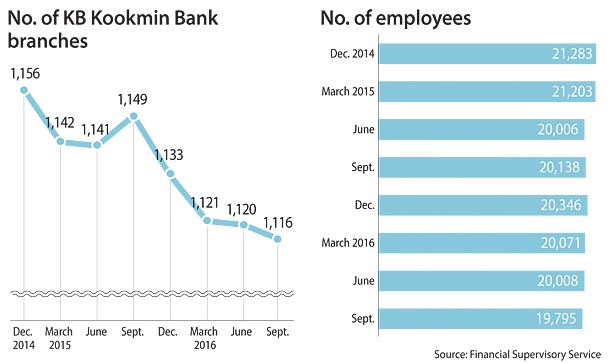 KB Kookmin Bank, the country’s largest in terms of assets, is considering charging additional fees for deposits and withdrawals at its brick-and-mortar branches, a move that has prompted backlash from its customers.

In the past three years, the bank has been working on downsizing its physical locations and workforce. Around 40 KB Kookmin branches have either closed or merged with nearby locations.

The imposition of fees, if it happens, would be aimed at drawing more people to KB Kookmin’s mobile and online banking system, the bank said.

Currently, the bank does not charge customers for deposits or withdrawals.

KB Kookmin Bank said a final decision has yet to be made on the matter and that discussions are “in a very early stage.”

A concrete timeline and scope of the fees have not been determined. “We haven’t even filed an application to the Financial Supervisory Service,” said a source at KB Kookmin Bank.

All financial institutions need approval from the financial watchdog to revise terms and include new charges.

The specific user base for the potential charge has yet to be decided, either, the source said, but multiple local media outlets have reported that those with lower account balances could be subject to the fees.

Consumer advocacy groups believe the bank wants to use the fees as a revenue booster.

“The fees will put more financial burden on low-income earners and older people,” said Cho Nam-hee, president of the Financial Consumers Agency, an advocacy group. “And since older people are less used to internet-based banking systems, they have much to lose as a result of the change.”

Other banks have announced similar measures to increase service charges. Citibank Korea said in December that it would impose a monthly fee on accounts with low balances.

KB Kookmin Bank’s decision would carry more weight than Citibank since it has the largest client base in Korea of over 30 million users.

Charging maintenance fees for low-balance accounts, though a common practice in the United States, is unusual in Korea.

Standard Chartered Bank Korea experimented with a 2,000 won maintenance fee in 2001 but stopped after three years due to customer complaints.