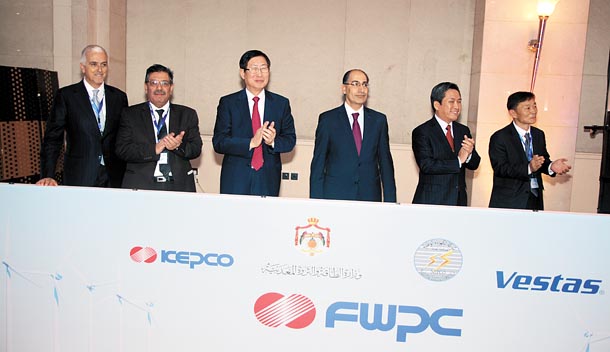 The Korea Electric Power Corporation has begun construction of a wind power plant in Ma’an, Jordan, about 100 miles south of the country’s capital of Amman.

The Korean power company, also known as Kepco, is the sole investor in the project. It will operate the plant for 20 years starting from October 2018, when the company expects to complete construction. The plant, called the Fujeij Wind Power Plant, will have the capacity to generate 89.1 megawatts of electricity annually, which is about 2 percent of all power produced in Jordan.

“This is the first time the company is entering the Middle Eastern market with wind power,” said Choi Choong-gook, a director at Kepco.

The project is based on a build-own-operate model wherein Kepco will build and operate the plant for 20 years. After the contract expires, the complex will be demolished, the company said. Kepco expects to take in nearly $570 million in revenue from the plant. The project’s cost will be about $184 million and partially financed by the Export-Import Bank of Korea.

The Fujeij Wind Power Plant will be Kepco’s third power plant in Jordan. Most recently, the company built a 573-megawatt plant in April 2015. Altogether, the three plants will be able to generate 24 percent, or 1,035 megawatts, of all energy generated in Jordan, Kepco said.

“The new plant will contribute to stably distributing electricity in Jordan, and we hope the deal will help the two countries cooperate more closely in the energy sector,” Kepco CEO Cho Hwan-eik said during a ceremony to celebrate the plant’s ground-breaking on Monday in Amman. Around 150 officials, including Ibrahim Saif, Jordan’s minister of energy and mineral resources, and Abdel-fattah Ali-Fayyad El Daradkah, CEO of Jordan’s National Electric Power Company, attended.

Kepco was chosen as the priority bidder for the project in 2013 and closed the deal in December 2015. The company started its overseas wind power business 10 years ago in China. Recently, Kepco also won orders to build solar energy plants in Japan and the United States. The company hopes to expand its foothold in the renewable energy market abroad, saying it supports the Paris accord on climate change signed in 2015.