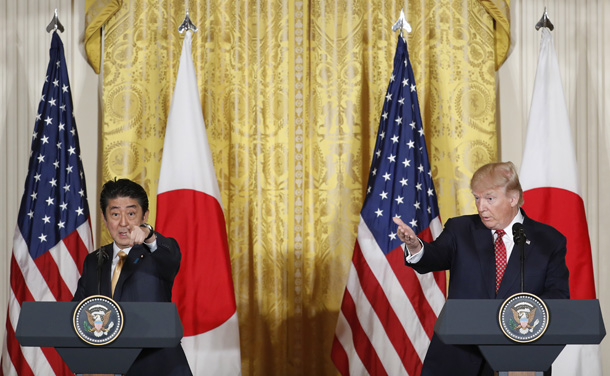 Over North Korea’s launch of a ballistic missile, U.S. President Donald Trump and Japanese Prime Minister Shinzo Abe had a press conference and announced to the world their intolerance of its nuclear and missiles programs. As the White House asked the reporters who had followed the two leaders to Mar-a-Lago resort in Florida to gather, the press immediately reported that the two leaders would soon issue a statement on the North.

It was dramatic as Trump and Abe gave the press conference after a friendly round of golf. It was a noteworthy news conference in many ways.

Therefore, Trump effectively supported Abe’s position of condemning the missile launch “absolutely intolerable.” The press conference was arranged while the leaders had dinner after a White House summit meeting. Trump did not mind Abe being the center of the conference.

But South Korea is the country living with the greatest threat from North Korea’s nuclear and missiles program. Korea is living with all kinds of possible provocations — not just nuclear attacks but also multiple rocket launcher attacks on the capital region, a localized war in the West Sea and terror attacks on government facilities.

Korea cannot avoid the reality that we are at the front line. Last year’s international sanctions on North Korea proved that South Korea is the most directly related party. The United States and Japan imposed financial and economic sanctions on the North, but the firmest action was the closure of the Kaesong Industrial Complex, a decision by our government.

Trump and Abe did not mention Seoul in the Feb. 11 press conference due to the special circumstances following the U.S.-Japan summit. But in reality, South Korea can never be sidelined in coordinated efforts to deal with North Korea. While respecting the press conference, Seoul should move with clear objectives on how to coordinate with the Trump administration on sensitive security matters. South Korea must have a plan for a preemptive attack — a double-edged sword that can be a realistic step to induce the North’s abandonment of a nuclear program yet would elevate tensions in the Korean Peninsula.

Also, South Korea must prepare rhetoric on our position if the Trump administration suddenly seeks unofficial dialogue with Pyongyang. I believe that diplomatic authorities have already started the under-the-table work.


*The author is a Washington correspondent of the JoongAng Ilbo.