‘We must present a unified stance on Thaad and be firm’

‘We must present a unified stance on Thaad and be firm’ 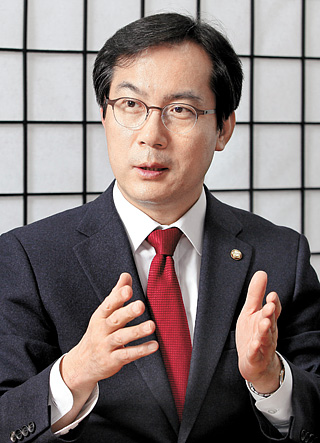 Rep. Kim Young-woo, who chairs the National Defense Committee in the National Assembly, said the U.S.-operated missile defense system, known as the Terminal High Altitude Area Defense (Thaad) system, which is now hotly debated among presidential hopefuls, is the only system capable of shooting down a ballistic missile akin to the one North Korea fired on Sunday.

“For the type of ballistic missile that the North fired, Thaad is the only defense mechanism capable of shooting it down,” said the defense committee chief during an interview with the Korea JoongAng Daily in his National Assembly office on Monday, a day after Pyongyang launched its first missile this year and its first since U.S. President Donald Trump took office.

Throwing his full support behind the anti-missile system that has drawn sharp protest form Beijing, the former journalist said Beijing will not protect Seoul from the North’s missiles by shooting them down, as the Thaad system is designed to do, saying South Korea must present a “unified stance” on the issue and “remain firm,” as it is a matter of national security.

With growing uncertainty caused by the North’s latest provocation, the Bareun Party lawmaker said North Korean leader Kim Jong-un sought to send a message to both leaders of Japan and the United States that his action “matters” in the geopolitical environment and they should take him seriously.

Reflecting on his nine years in the National Assembly, the lawmaker noted one of the most memorable events was his visit to the U.S. Pacific Command in Hawaii in 2009, when he said he was deeply moved by the U.S.’s efforts to preserve the memory of the invasion of Pearl Harbor by preserving bullet marks on buildings. “If it was up to us [South Korea military], we would have repaired them with marble,” said Kim, half jokingly.

Below is an edited excerpt of the conversation.


Q. North Korea fired its first missile this year when U.S. President Trump and Prime Minister Shinzo Abe of Japan were having a meeting. Do you think Pyongyang was sending a message?

A. President Trump issued a number of warnings to North Korea [to refrain from provocations]. And Kim Jong-un made clear his intention to pursue the ICBM (inter-continental ballistic missile) program in his New Year’s address, with a clear intent to let it be heard by Washington, claiming Pyongyang was at the final stage of perfecting it. Speculations were high that the North was about to provoke again this month as the birthday of his late father, Kim Jong-il, approached.

I also personally thought they would fire a missile around the time of Kim’s (75th) birthday and they did as I had predicted. [With the Sunday missile launch], Kim wanted to let Trump and Abe know that he matters and there is an issue of North Korea that needs attention in the region.


How do you expect the Trump administration to respond to North Korea?

During the campaign, it was all about “America First” for Trump. He will seek a policy for the sake of national interest. He was elected as a Republican nominee and the Republican Party has its own party principles. The U.S. has played a role as the world police and always valued the importance of maintaining a strong alliance with other states.

On that note, the Obama administration sustained the Bush administration’s alliance policy despite the change of power. But it is true that President Trump has a tendency for unpredictability. We have to wait and see.


How heavily does the South Korean military rely on U.S. intelligence when it comes to North Korea’s missile program?

We don’t have a reconnaissance satellite, which the U.S. operates to collect intelligence on the North Korean missile programs. With such satellites, Washington has access to high-definition imagery showing North’s missile sites. And that is why a strong Seoul-Washington alliance is vital. If that alliance is shaken, the U.S. may opt to present us with imperfect data, which occurred in the past.


Referring to the North’s missile launch Sunday, your fellow Bareun Rep. Yoo Seong-min said politicians and presidential candidates should end disagreements over the Thaad deployment. What do you think?

I agree with him 100 percent. For this type of a ballistic missile North fired [on Sunday], Thaad is the only defense mechanism capable of shooting it down. If the North just altered the launch angle with a nuclear warhead mounted on top, it will be a serious nuclear arsenal posing a direct threat to the South Korean people. And Thaad can stop it from hitting us.

On China, we have to keep taking to them to make them understand why we need it. Will China protect us from a North Korean missile? No, they won’t. We have to present a unified stance on the issue and remain firm in explaining why we need Thaad.

If we renege on a mutual agreement with Washington and cancel the deployment, that decision will leave the impression in the international community that South Korea is not to be trusted. Such backpedaling should never be allowed.

Some say Seoul should give up on inducing North Korea to abandon its nuclear program but instead try for bring a freeze to the program in exchange for economic incentives, citing a nuclear deal reached with Iran in 2015.

I talked to some policy makers in the U.S. during my visit [to Washington, D.C.] and what they told me is that Iran’s case is completely different from the North’s. While Tehran displayed some flexibility on its nuclear program and signaled that it might consider stopping it, the North has shown no sign of flexibility. Pyongyang sees itself becoming a nuclear-armed state as the main reason for its existence.

Negotiation mechanisms applied for the 2015 Iran nuclear accord, therefore, are not compatible with North Korea. Without a fundamental change of policy thinking in the top North Korean leadership, dialogue alone will not bring any change to its nuclear program.

And that’s why sanctions and pressure are required. We have carried out sanctions and put pressure on the North over the past nine years, and they didn’t produce the outcome we had wanted, partly because of Beijing’s reluctance.

But sanctions are working to some extent, according to former senior North Korean diplomat Thae Yong-ho [who defected last year]. He said sanctions must continue. With continuing pressure and sanctions coupled with provisions of outside information into the country, he said the Kim regime would be forced to change or even collapse.


Which experience has had lasting impact on you as a lawmaker since you were first elected in 2008?

One of the most unforgettable experiences I had as lawmaker was my visit to the U.S. Pacific Command in Hawaii in 2009. On my visit to the air force headquarters at the pacific command, I came across all these bullet marks on the building, remnants of Japanese bombardments during the invasion.

I asked a general why these marks had not been repaired. He said his soldiers do a daily run past these bullet marks and so do not forget that day of infamy on Dec. 7 in 1941. I was deeply impressed, thinking it epitomized the spirit of the U.S. military.