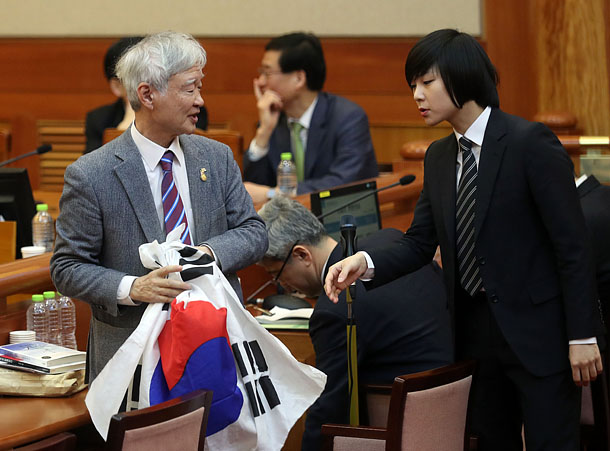 Seo Seok-gu, one of Park’s lawyers, takes a Korean flag from his bag and unfolds it toward the audience before the Constitutional Court opens a hearing on Tuesday. He was forced to put the flag back in his bag after a court official intervened. [YONHAP]

The Constitutional Court dropped five witnesses on Tuesday from the impeachment trial of President Park Geun-hye, as they repeatedly failed to attend the hearings despite her lawyers’ requests.

The court held the 13th hearing on Tuesday, but three witnesses scheduled to testify did not show up.

An Bong-geun, former presidential secretary, was supposed to make an appearance in the morning at the request of Park’s lawyers. Two other witnesses on the president’s side were scheduled to testify in the afternoon. None of them showed up.

“Because they are not directly related to the impeachment, the court will not allow them,” Lee said.

An, known as one of the three “door knobs,” was first called as a witness on Jan. 5. Because his whereabouts were unknown, the hearing was rescheduled for Jan. 19, and then to Tuesday. An worked as a personal secretary to the president.

Park’s lawyers wanted to hear his testimony about the president’s whereabouts and actions on the day of the Sewol ferry’s sinking on April 16, 2014. He was also accused of allowing Choi Soon-sil’s secret and frequent entries to the Blue House.

The court’s decision indicates its intention to quickly end the trial. As of now, the final hearing is scheduled for Feb. 22. Because Acting Chief Justice Lee will end her tenure on March 13, speculations were high that the court will try to rule before another vacancy is created. After Chief Justice Park Han-chul retired last month, the trial is being operated by eight judges, not the full nine.

Justice Lee also issued a warning to both Park’s lawyers and the National Assembly to “refrain from making remarks and actions that infringe upon the fairness of the impeachment trial.”

Before the hearing started on Tuesday, Seo Seok-gu, one of Park’s lawyers, took a national flag from his bag and unfolded it. With a smile, he held the flag toward the audience. A court official stopped him and he put it back in his bag.

Lee, nominated by both then-President Lee Myung-bak and Park, who at the time was president-elect, to be the next chief justice of the Constitutional Court in January 2013, was hammered with accusations about his integrity during confirmation hearings at the National Assembly and gave up the post.

“Without any family, Park sacrificed herself for the country and the people, as if she was married to the country,” Lee said.