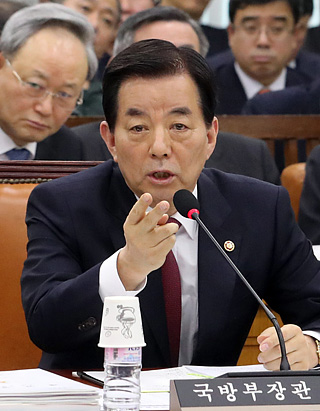 The intermediate-range ballistic missile North Korea test-fired Sunday morning has the capacity to fly “2,000 kilometers (1,243 miles) or more,” which isn’t the longest Pyongyang has launched but was technologically advanced enough to “unnerve Washington,” the South Korean intelligence authority said Tuesday.

A range of 2,000 kilometers encompasses all of South Korea and Japan, including American military bases in Okinawa.

The distance between North Korea and the mainland United States is about 10,000 kilometers, which military authorities in both Seoul and Washington do not believe Pyongyang is capable of achieving yet.

The statement made by the National Intelligence Service (NIS) during a briefing for ranking members of the National Assembly’s National Defense Committee behind closed doors confirms Pyongyang’s claim that Sunday’s launch was intentionally adjusted to fly a shorter distance than its actual capability.

Rep. Lee Cheol-woo of the Liberty Korea Party, who chairs the committee, released parts of the discussion to reporters after the meeting.

The Pukguksong-2 was launched from Banghyon Air Base in North Pyongan Province at 7:55 a.m. Sunday, reaching an altitude of 550 kilometers and flying 500 kilometers before splashing into waters off the North’s east coast, controlled by Japan, according to the South Korean Joint Chiefs of Staff.

The North’s state-run Korean Central News Agency reported Monday that the missile was test-fired at a high angle “in consideration of neighboring countries,” without giving any further detail.

According to the NIS, the Pukguksong-2 was launched at an 89-degree angle and traveled at a speed of Mach 10 (7,612 miles per hour). If it had been fired at a lower angle, the missile could have flown much farther, the NIS conceded.

“We were told from the NIS that, although they haven’t finished analyzing, the Pukguksong-2 would probably be able to fly 2,000 kilometers or longer if it were to be fired in an actual battle,” said Rep. Lee.

The lawmaker said he was told by the NIS that Pyongyang has improved its “missile load capacity,” which Washington would be alarmed by.

In regards to the North’s use of a solid-fuel powered engine, Rep. Lee quoted the NIS as saying that the North had reached a “significant” level of technology and that it “didn’t see it coming.”

According to descriptions from 38 North, a website on North Korean affairs, a missile that relies on solid instead of liquid fuel “would be more operationally robust, capable of being transported off-road without damage and launched on very short notice.”

It also could serve as a “stepping stone to the development of a solid-fuel intercontinental ballistic missile,” 38 North continued.

Rep. Lee said the missile flew for 13 minutes at a speed of Mach 10, which South Korea “would only be capable of countering with the Terminal High Altitude Area Defense (Thaad)” missile defense system from the U.S.

The anti-missile defense system, which is scheduled to be deployed in the South between August and October, is known to be able to shoot down any missile flying at a speed of Mach 14 or below.

Lee raised doubt that the planned Kill Chain system would effectively work now that the North has successfully test-fired a missile with solid fuel.

Under the Kill Chain system, which is expected to be completed by 2023, Seoul and Washington are supposed to work together to destroy mobile launch pads with F-35 fighter jets upon confirmation of missile locations provided by U.S. satellite imagery.

“It takes one to three hours to inject liquid fuel into a missile, giving time [for South Korea and the U.S.] to detect the activity prior to a launch,” explained Lee. “But if the North uses solid fuel, all they need is five to 10 minutes.”

“Realistically, doesn’t that mean [it would be] impossible to activate the Kill Chain?” he rhetorically asked.

National Defense Minister Han Min-koo, who was at the NIS briefing, was said to have denied the conclusion that the pre-emptive strike system was futile, saying that from the beginning, the South “didn’t calculate the time Pyongyang would spend on injecting liquid fuel anyway because it would do so secretly.” So the time gap “doesn’t affect the Kill Chain that much,” he said.