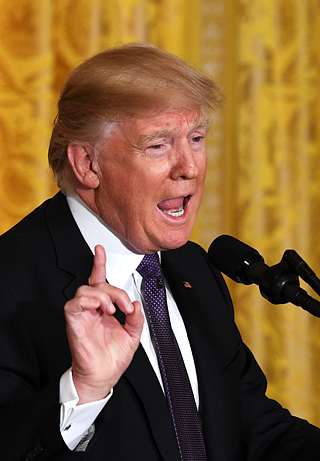 “Obviously, North Korea is a big, big problem, and we will deal with that very, very strongly,” said Trump at the White House in a joint press conference with Canadian Prime Minister Justin Trudeau.

North Korea’s Sunday missile launch is expected to hasten the Trump administration’s formulation of a policy on Pyongyang and its consideration of new measures such as so-called secondary boycotts. It is also expected to speed the deployment of the U.S.-led Terminal High Altitude Area Defense, or Thaad, system to South Korea. The Thaad antimissile system has been considered an effective defense against midrange missiles of the sort tested Sunday.

On a visit to Seoul earlier this month, Defense Secretary James Mattis met with Korean Defense Minister Han Min-koo and the two sides called for the Thaad system to be deployed here as planned.

Washington is particularly worried about the North’s development of intercontinental ballistic missiles, or ICBMs, which could prove to be a game changer in U.S. policy. Pyongyang’s testing of an intermediate-range missile with upgraded technologies on Sunday was seen as bringing it one step closer to testing an ICBM.

“Donald Trump announced himself that he will deal with the North Korea issue strongly, indicating Washington is extremely incited over North Korea’s provocation this time around,” a South Korean Foreign Ministry official told the JoongAng Ilbo on Tuesday.

“Because this happened while the leaders of the United States and Japan were meeting, President Trump was said to have also been personally enraged,” the official continued. “That is why the U.S. administration’s North Korea policy, which usually takes five to six months to form, is expected to be completed more quickly, in three to four months.”

This comes amid a shake-up in the White House national security team as Michael Flynn, Trump’s national security adviser, resigned Monday after it was revealed he had discussed sanctions on Moscow with the Russian ambassador to Washington.

There is concern on the impact his resignation will have on security affairs. Flynn has previously expressed strong support for the U.S. alliance with South Korea and prioritized the Pyongyang issue.

The international community has been united in condemning Pyongyang for its latest provocation and in calling for the implementations of more sanctions on the regime.

In a unanimous statement on Monday, the UN Security Council “strongly condemned” North Korea’s Sunday missile test and another last October, calling them in “grave violation” of its international obligations.

It added the members of the Security Council “deplore” all of North Korea’s ballistic missile activities and noted that such activities contribute to the regime’s “development of nuclear weapons delivery systems and increase tension.”

U.S. Ambassador to the UN Nikki Haley said in a statement, “It is time to hold North Korea accountable ? not with our words, but with our actions.”

The former South Carolina governor called on the Security Council to “use every available resource to make it clear to the North Korean regime - and its enablers - that these launches are unacceptable.”

The effectiveness of sanctions on North Korea is largely dependent on Beijing’s enforcement of them as it accounts for some 90 percent of Pyongyang’s trade. Along with the international community, China and Russia, Pyongyang’s traditional allies, both expressed disapproval of North Korea’s missile launch in stronger language than in the past.

“China, on its part, will continue to work with other parties including the U.S. to push for the settlement of the Korean Peninsula nuclear issue and maintain peace and stability on the Peninsula,” he continued.

While Beijing has expressed “opposition” to North Korea’s nuclear tests in the past, it has not employed the term to its missile launches before. China has generally expressed “regret” or “concern” over Pyongyang’s missile launches, weaker formulations.

“As a permanent member of the Security Council and a responsible member of the international community,” said Geng, “China has always enforced the Council’s resolutions in their entirety, promoted peace talks, and made unremitting efforts to facilitate the settlement of the issue of Korean Peninsula.”

However, he added that the root of the North Korean nuclear and missile issue lies in differences between Pyongyang and Washington, as well as with South Korea.

The Russian Foreign Ministry likewise said Monday in a statement that Pyongyang’s missile launch was in “defiant disregard” of UN Security Council resolutions.

North Korea has ignored China and Russia’s various warnings over its nuclear and missile provocations.

However, RIA Novosti reported that Konstantin Kosachev, chair of the foreign affairs committee of the Russian parliament’s upper house, warned on Sunday, “Unilateral actions taken by the United States, the Republic of Korea or Japan will only ratchet up the already high tensions.”

“Our government lauds the member states of the Security Council, including China and Russia, for declaring a prompt and strong position on North Korea’s provocation,” said Cho June-hyuck, spokesman of the Foreign Ministry, during a briefing on Tuesday.

“Our government, through the process of issuing the statement, closely cooperated with allied nations.”