‘Finns and Koreans have similar mind-sets’

‘Finns and Koreans have similar mind-sets’ 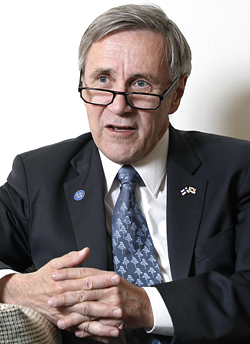 Finland is home to the Northern Lights, Santa Claus, cloudberries and berry-foragers, reindeers and wolves and shockingly strong coffee.

But the northern European country has recently gained attention in Korea for its new social welfare policy of universal basic income.

“It is a trial - we have selected 2,000 people in Finland who are unemployed or partly employed and are aged between 25 and 58,” said Finnish Ambassador to Korea Eero Suominen. “They are randomly selected and will be given 560 euros ($595) a month. And they will not lose it, even if they get employed.”

The Finnish government’s two-year trial on universal basic income, which took off on Jan. 1, is the first of its kind proposed by a government. Presidential contenders in Korea have put forward the idea recently, as the election date approaches this year.

In celebrating 100 years of Finnish independence this year at his residence in Seoul on Feb. 8, the ambassador spoke with the Korea JoongAng Daily on some of the Finnish government’s responses to social issues that Finland and Korea face commonly.

In battling the rising youth unemployment rate in Korea, the Seoul Metropolitan Government has tried handing out a monthly cash allowance of 500,000 won ($434) to 3,000 young adults aged between 19 and 29 for six months. The plan was implemented in August and shut down a day later by the Ministry of Health and Welfare.

When it was later revealed some recipients of the monthly cash allowance were selected despite their affluent family backgrounds, the program received further criticism.

“The concern is that the recipients are not obliged to do anything,” said Ambassador Suominen, addressing the criticism. “And people are afraid that recipients would get lazy or have no incentive to work. But at the same time, I think modern people are quite work-related. It’s become a culture to be part of the working group or society, and I think it’s quite natural that you want to work.”

The ambassador said universal basic income would provide needed cash to the partially employed, as well.

“If you have strict limits [on the program], it makes it much more difficult,” he said. “For instance, people might be only partially employed, who will then need different additional benefits. This [universal basic income] would be a one-sum solution.

“Also, we want to see if this would be a good solution for those who want to start an enterprise,” he said. “The recipients will find a way to self-employment or new jobs and then little by little the project will make their lives easier.”

According to the OECD, Finland’s unemployment rate in 2014 was 9.4 percent of the labor force, higher than Korea’s 3.7 percent that year. The Finnish government that year spent 1.9 percent of its GDP on cash benefits for the unemployed, while Korea spent 0.3 percent.

Suominen said it’s going to take a while to see how the universal basic income project pans out.

“We have very ambitious government programs, but it is pretty slow and it’s only been two years,” he said. “The real results of these big reforms will be seen after three to four years.”

“People are scared of having children because they are concerned about their jobs, careers and money,” Suominen said. He said it is crucial to provide a safe environment for parents, especially mothers, during pregnancy and after birth, and to ensure they can come back to work without facing disadvantages.

“In Finland, when the child turns nine months old, parents are entitled to take the child to a day care,” he added. “And parents have a chance to stay at home until the child is three, and you don’t lose your job during this time. But it has proved somewhat problematic, more for ladies, who face problems with delayed careers when they come back to work.

“And it actually takes quite a lot [to be working parents] - you have to clothe them in the winter, and then you take them to day care, and then you go to work and then after work you have to run back to fetch your children and get home - it’s not an easy life to combine your career and home.

“As a working mother and father, you have to be a superstar.”

And the experience showed during the centenary celebration of Finland’s independence at his residence. Not shy to offer Finnish chocolates to guests who arrived earlier than others, the ambassador was a gracious host.

“Welcome to the opening reception of the celebration of Finland’s 100 years of independence,” the ambassador said in addressing the crowd that had packed into the living room on the first floor. “Finland gained its independence during the turbulent years of World War I, in the aftermath of the Russian revolution.”

After highlighting Finland’s education system, press freedom, innovative economy and environmental performance, the ambassador closed his speech with a side note.

“I have to keep to the reputation of the silent Finns and keep my speech as short as possible, and at last give you the opportunity to enjoy the food and drinks prepared by the Finnish chef tonight,” he ended his speech, but not before adding, “Now I must go into the kitchen to see if it’s all ready.”

In celebrating the 100 years of independence, the Finnish embassy is set to introduce a number of exchanges between the two countries this year. Starting with a four-day concert, collaborated between Kumho Asiana Cultural Foundation and Finland’s Kuhmo Chamber Music Festival in February, the embassy will also be involved in an education seminar in May, a week of celebration on Finnish arts and culture in Jeju Island in June, an amateur marathon tour of some 40 Koreans from the arctic circle to Helsinki from July to August and a jazz concert in September with Finnish musician Iiro Rantala.

Five months into his service in Seoul, the Finnish ambassador emphasized how similarly the people of the two countries think.

“We are two countries whose people have similar mind-sets,” he said. “I think we are practical countries - we like practical solutions and we want to make things work and be effective. We are also quite humble people - we are doing more than we are speaking. And we are both small countries in the realm of bigger neighbors.”

The ambassador highlighted three key areas in which the Finnish government is looking forward to cooperating with Korea.

“We are both countries of export-based economics, so market access and liberalization of trade is one of the areas where we are able to make progress,” he said. “The second area is climate change - this is something that I think both countries agree on the urgency of, especially in implementing the Paris Agreement.

“And there are SMEs [small-to-medium sized enterprises],” he said. “We find it important to improve the internationalization of SMEs. It has been a surprise how vast bilateral cooperation has been, so I’m happy there is a wide range [of opportunities to work together].”

Int'l students urged to get vaccinated before arriving