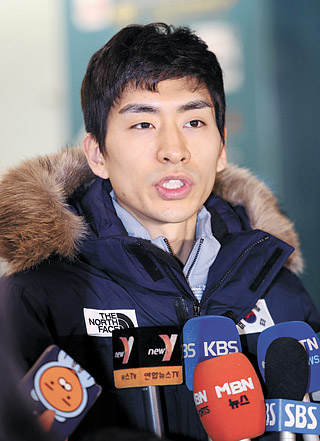 Korean speed skater Lee Seung-hoon has said he will compete in all four events at the Asian Winter Games starting on Sunday Feb. 19 in Sapporo, Japan.

This comes after a leg injury during the race at the International Skating Union (ISU) World Single Distances Speed Skating Championships at Gangneung Oval in Gangwon on Friday.

Aside from his main events, mass start and team pursuit race, Lee will also be competing in the men’s 5000 meters and 10,000 meters.

“I feel the tightness in my right calf from the stitches, but it doesn’t affect me much when I’m skating,” Lee said. “Since I’m not in horrible pain, I think I can compete in all four events.”

Although he didn’t have any serious injuries, Lee’s participation in the Asian Games was uncertain as he had eight stitches and was estimated to take about two weeks to recover. But Lee was determined to compete in the Asian Games.

“I thought my season was over when I was headed to the hospital,” Lee said. “But through treatments, it didn’t hurt much during training so I decided to participate in the Asian Winter Games.”

In the 2011 Winter Asian Games held in Astana and Almaty in Kazakhstan, Lee won three gold medals - the men’s 5000 meters, 10,000 meters and mass start race - and won a silver medal in the men’s team pursuit race.

The Sapporo Asian Winter Games is considered as one of the biggest Asian winter sports festival as it is held through Feb. 19 to 26. The Korean national team set a goal to win 15 gold medals and to finish second in overall medal standing.

As this is an international event before the 2018 PyeongChang Winter Olympics, players are determined for good results.

“When I competed in the Winter Games six years ago, I didn’t have much knowledge on the categories and events as it was only my third month switching to long track speed skating from short track speed skating,” Kim Bo-reum, winner of the women’s mass start event at the ISF World Championships on Sunday, said. “It’s different now. I can’t guarantee a medal in mass start as the event itself has so many odds, but I am hoping for a gold medal in women’s 5000 meters race.”

“I wanted to do well at the World Championships but I couldn’t,” Lee said. “I’ll make it up at the Asian Games.”