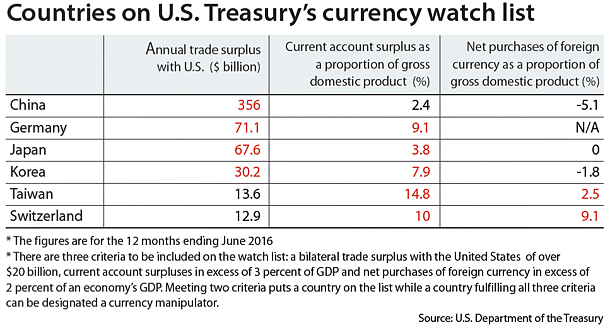 There was not much celebration when the country’s central bank announced 2016’s current account surplus of nearly $100 billion, the second highest ever.

The country’s huge current account surplus, which amounted to around 7 percent of gross domestic product, only increases the chance of Korea being placed on a U.S. currency watch list again in April, when the U.S. Department of the Treasury releases its foreign exchange report.

With Donald Trump in the White House - after promising during the campaign to punish foreign countries that take advantage of the U.S. in matters of trade - there is a growing worry that Korea could be branded a currency manipulator.

The Financial Times noted that Korea and Taiwan - not China and Japan - are the most obvious targets of the charge of currency devaluation for competitive advantage, since those countries have bigger current account surpluses as a proportion of their GDPs.

Although that view can be debated - a big trade surplus is not conclusive proof of currency manipulation - mounting pressure from the press and worries about the Trump administration put the financial authorities in a jam.

A source at the Bank of Korea (BOK) told the Korea JoongAng Daily that the central bank will reach out to the new U.S. Treasury team and try to “address misunderstandings” before April.

“We will explain that Korea’s trade surplus is caused by factors such as low oil prices and declining domestic consumption associated with the rapid aging of our population,” said Kwon Min-soo, head of the foreign exchange market team at the BOK.

Media outlets reported that the central bank sees a visit by Treasury Department officials to Korea before April as an opportunity for putting their heads together. But Kwon said, “The visit is not yet decided. We will try to communicate with the Treasury Department on the matter as soon as a new secretary has been confirmed.”

He added that the won-dollar exchange rate moves depending on market factors such as the U.S. Fed’s decisions on interest rates and Trump’s remarks on the dollar.

Korea, currently on the watch list, meets two of the three criteria to get on: Korea’s bilateral trade surplus with the U.S. exceeded $ 20 billion and its current account surplus was over 3 percent of its GDP. The other criterion is net purchases of foreign currency totaling over 2 percent of an economy’s GDP, which indicates what the Treasury says “persistent, one-sided intervention” in the FX markets.

Under the Trade Facilitation and Trade Enforcement Act of 2015, meeting two criteria puts a country on the watch list while a country fulfilling all three criteria could be designated a currency manipulator.

Once designated a currency manipulator, the U.S. can take a set of punitive actions, including stopping the U.S. Overseas Private Investment Corp., a government development agency, from financing any corporations or programs in Korea.

Yoo Il-ho, minister of strategy and finance, played down the possibility of the U.S. naming Korea a currency manipulator last week. But he recently took a more cautious approach after withering criticism that his view was out of touch with reality.

“We can’t speak conclusively that the U.S. would not name Korea as a currency manipulator,” he said during a regular briefing at the National Assembly on Tuesday. “But the possibility remains low.”

Analysts are divided over whether the U.S. will take a further step to designate Korea a currency manipulator.

Kim Moon-il, an economist at Heungkuk Securities, thinks it could.

“Back in 2014, the won-dollar exchange rate swung around 1,008 won but it rose to the 1,150 won level recently,” Kim said, “The government sought to keep the won under the 1,200 won level on concerns about capital outflows. But from the broader perspectives, [the government] can be seen as leading the depreciation of the won.”

The Korea Institute for International Economic Policy warned that the U.S. could choose smaller economies such as Korea and Taiwan as examples of tough currency policy.

But others remain optimistic, saying that the decision will cost a lot to the U.S.