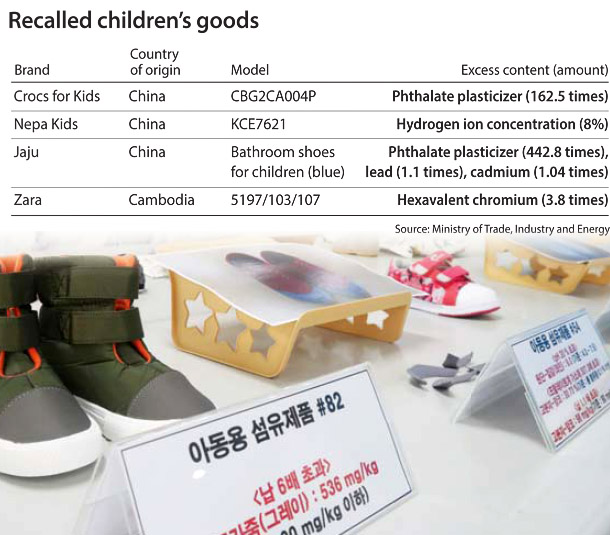 The Ministry of Trade, Industry and Energy has ordered the recall of 47 household products, including 21 children’s products.

Among the list of recalled products issued Wednesday were well-known global brands like Zara, Crocs for Kids, Nepa Kids and Bearpaw. The products failed to meet standards put forth by the Korean Agency for Technology and Standards, which falls under the Trade Ministry. The agency has banned the products from sale in the country, and companies will have to initiate recalls or exchanges.

Half of the products on the list were shoes. Other products included bed sheets, hats and stationery.

The 21 children’s products on the list were found to contain harmful chemicals in excess. Lifestyle brand Jaju’s bathroom shoes for kids were recalled for containing too much phthalate plasticizer, lead and cadmium. Bearpaw’s boots were recalled for the same substances.

Phthalate plasticizer is a chemical additive used to soften plastic, but it is also an endocrine disruptor that can cause harm to children when ingested. Lead and cadmium are both toxic metals, and many countries have been imposing higher restrictions on their use in children’s products.

Several sticker sets were also found to have too much phthalate plasticizer.

Zara’s leather boots were found to contain 3.8 times more hexavalent chromium, which can cause sore throat. Nepa Kids’ textile sneakers had 8 percent more hydrogen ion concentration than allowed, which could cause dermatitis.

Aside from children’s products, the recall list included 20 household electronics including LED lights and cables that had poor electric shock protection, as well as six kitchen blenders in which the blades were found to rotate even after the device was turned off.

Nineteen electronics companies will be charged for illegal practices including use of a different component than one certified by the government.