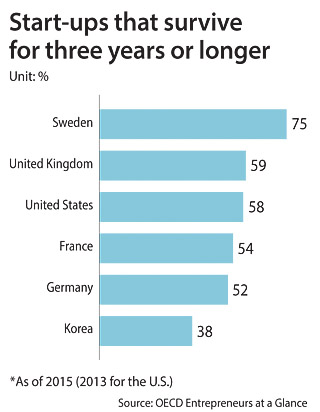 Start-ups are hot in Korea.

After a flurry of adventurous entrepreneurs jumped on the bandwagon of the start-up boom with rosy outlooks, the number of start-ups, or those companies that are less than three years old, surpassed 30,000 last year - a record high.

The government has taken start-ups as the hatchery of its creative economy drive and large companies have been proactively nurturing and supporting the companies as they look for their next growth engines. Tech bellwether Samsung Electronics even has said it would adopt a new corporate culture that takes after start-ups to become more nimble and flexible.

But the reality is bleak. Sixty-two percent of those Korean start-ups were forced to shut down within three years of launch, according to a study by the Korea Chamber of Commerce and Industry, a business lobbying group, based on 2015 data from the Organization for Economic Co-operation and Development.

Korea ranked 25 out of 26 OECD countries researched. Sweden had the top survival rate of 75 percent, followed by the United Kingdom at 59 percent and the United States at 58 percent.

“Korean start-ups reaped success in the initial stage on the back of government’s efforts to deregulate and to facilitate the process of launching a business,” said the report.

The bar for launching a start-up has been lowered greatly in the last decade in Korea. According to data compiled by the World Bank, the total steps required for registering a new start-up have been narrowed to two from 12 and the period has been shortened to four days from 22 days between 2006 and 2016. Korea ranked 11th out of 190 countries in 2016 in terms of competitiveness, a jump from 116 out of 175 countries 10 years prior.

The international financial institution blamed lack of an ecosystem for proper funding and the difficulty of finding sales channels for Korean start-ups to leap to the next level.

In other advanced economies with robust activities of start-ups, so-called angel investors - affluent individuals who inject capital into promising start-ups in exchange for ownership equity or convertible debt - are active. While total funding from angel investors in the United States registered 25 trillion won ($22.9 billion) as of 2014, investors in Korea doled out just 0.3 percent of it at 83.4 billion won. Angel investors cite a challenging environment to retrieve their capital.

“It takes an average of 6.7 years for companies to list on the Nasdaq in the United States but it takes 13 years on the secondary Kosdaq,” said the report. “When over 80 percent of all corporations shut down in a decade in Korea, there will inevitably be few investors who would support them in expectations for 13 years, from a realistic perspective.”

Even though start-ups have excellent technological capacity, their manufacturing and marketing capabilities are comparatively low.

In start-up powerhouses such as the United States and some countries in Europe, start-ups tend to launch first with their core technologies that have the potential to be commercialized and retrieve the initial capital by selling off part of or all of its stake to large and established companies when they actually debut in the market. In Europe, for instance, the portion of initial funding for start-ups that is retrieved through mergers and acquisitions stood at 51 percent as of 2015, compared to a mere 1.3 percent in Korea.

“Research in the United States shows that those start-ups that have received capital from large companies or venture capitals grow to be more innovative,” said Shin Hyun-han, professor at Yonsei Business Research Institute.