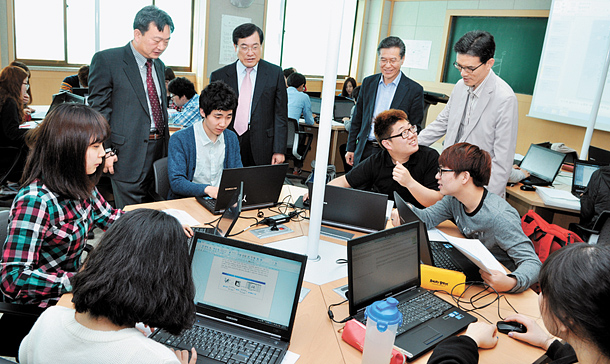 Students at Konyang University’s College of Interdisciplinary and Creative Studies, located in Nonsan, South Chungcheong, discuss concepts with their professors in a class in 2013. The college’s 18 students are graduating today. [KONYANG UNIVERSITY]

Whilst the so-called path of success for many students here begins by entering a renowned university such as Seoul National University, Korea Institute of Science and Technology or Pohang University of Science and Technology, a few outliers have emerged in the form of graduates of a university in Nonsan, South Chungcheong, who are landing jobs without much trouble after graduation.

Jeong Han-jin, 23, set to graduate today from the College of Interdisciplinary and Creative Studies at Konyang University in Nonsan, has a job lined up at the Korea Health Industry Development Institute, an affiliate of the Ministry of Health and Welfare.

“The key to my success is the classes that I took,” Jeong said.

Having enrolled at the four-year program of the Department of Pharmaceutics and Biotechnology at the university in 2013 along with 35 others, Jeong and his classmates took only one to two courses per semester. The university has a unique curriculum whereby one year is divided into 10 semesters - each student takes one to two courses per semester, and up to 18 courses a year. Their summer and winter breaks are one-month long each.

The curriculum is all about going deep in short spans of time.

At the end of each academic year for the first three years, Jeong wrote a research proposal on developing medicine and medical supplies that could be a hit in the market in 10 years. He received instruction and guidance from a professor who used to work at a pharmaceutical company to research the field and present his findings.

Jeong’s specialty in the field at a young age reportedly grabbed the attention of employees at the Korea Health Industry Development Institute when he interned there last year.

“The work at the institute didn’t vary much from what I did in my classes,” he said. “I also think that my English skills, which I worked on through my classes at the university, surprised the interviewers.”

In addition to the unique 10-semester curriculum, the university focuses the last semester before breaks on intensive language training. For one month before each break, students only take classes in English, Chinese and Japanese and arrange ways to visit the countries of their chosen language during their breaks.

“I was able to strengthen my Japanese skills with five semesters of intensive language training,” said In Da-som, 24, who was recently hired at Josai International University in Japan. “I visited Japan during breaks and didn’t have to go to cram schools in Korea to study the language.”

There are more traits to the unique curriculum of the university, developed by a former executive director of Samsung SDI and other executives from relevant fields and companies.

Students are expected to prepare for classes by reading in advance and discussing and presenting their findings during classes. Professors are expected not to teach them in a one-sided manner but to actively discuss concepts and findings with students.

“The course that I remember the most was on marketing. We visited a cosmetics company and came up with a marketing strategy,” said Min Hyun-soo, a 29-year-old graduate of the university who works at an affiliate of LG Electronics. “We got firsthand experience in the field by communicating and interacting with not only professors but also with employees in the field.

“I was prepared to answer questions logically during job interviews because I was trained to do so in my liberal arts course, where we read novels and debated,” Min added. “A lot of our projects involved acting in front of the class, and this helped us to get used to speaking in front of people, too.”

Others said the professors were very involved in the students’ welfare at the university.

“I was worried that my major, software development, wasn’t an area that I wanted to pursue in my career,” said Lee Eun-sun, 23, who works at a software testing company. “I often sought advice from a professor who used to work at a testing company for gaming programs, and I was so thankful that the professor would always welcome me into the office.”

A total of 18 students will be graduating from the College of Interdisciplinary and Creative Studies at Konyang University this year. The university said one is pursuing a graduate degree in pharmaceuticals and 13 have secured jobs. Of them, one has been hired at a foreign pharmaceuticals company, while the rest are to work as salaried employees at conglomerates and public organizations.