“The growth in skeleton gave us hope,” Park said.

To Park and Cho, bobsleigh and skeleton’s success is a good motivation as the categories are formatted in similar ways.

Over the past few years, Korea’s bobsleigh and skeleton developed massively, but luge was left behind as there weren’t any distinct Korean lugers to look out for.

Korea showed its interest in developing a luge program by granting special naturalization to a German-born Korean luger Aileen Frisch, but luge in Korea is not at a point where it can compete against the world’s best. 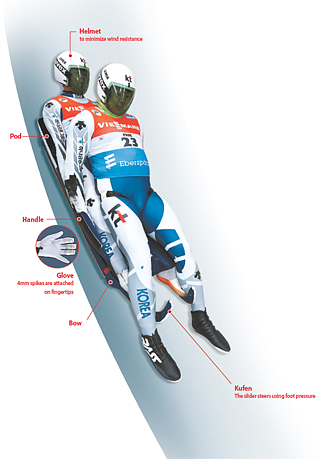 “Once Korea’s luge gets bigger, we’ll get the title of being the best,” Park said.

When the duo decided to race as a team in November 2013, they quickly developed into Korea’s hope in luge. In less than a month of training together as a team, the duo finished in eighth place in the men’s relay event at the 2013 Luge World Cup in Watersburg, Germany.

Although they finished 18th out of a 19 team field at the 2014 Sochi Winter Olympics, they’ve been slowly surpassing their limits.

Last month, the team finished 15th out of 27 teams at the Luge World Championship in Innsbruk, Austria. Not only that, the duo set Korea’s luge record by winning bronze medals at the 2016 and 2017 U23 World Luge Championship.

Luge doubles requires great teamwork as the event requires two lugers to fit in a small sled and race down a frozen track at a speed of 150 kilometers (93 miles) per hour. Park sits in the front, where he steers, while Cho sits at the back for balance.

“There were times when I blamed Jung-myung for poor records, but after years of training, he is more than a friend or a partner to me,” Park said.

Over the years, they fell multiple times and through that, they learned to trust each other more during the race.

The duo came from very different sporting backgrounds, as Cho was a football player until high school and Park was a biathlete.

“When I first started, I couldn’t find the equipment like the sled, shoes or gloves,” Park said. “So I trained in our regular clothes and runners.”

In the beginning, the only training they did was running and pushups since there was no facility for luge racers. After, they trained on asphalt roads with corners as an replacement for the actual sliding track. 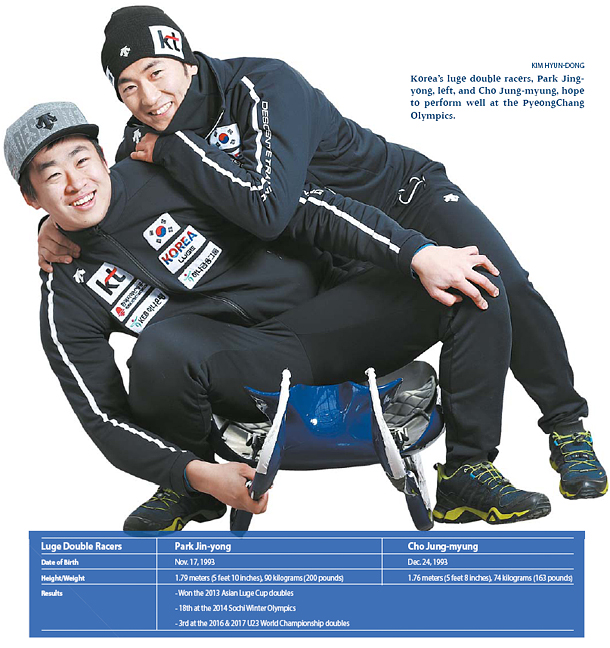 Despite the poor practice conditions, through repetitive training sessions, they quickly caught up to foreign players.

“Once we improve on our weakness, starting, there shouldn’t be a problem in finishing in the top 10,” Park said.

“We’ll train at the newly built Alpensia Sliding Centre as much as we can for the next year so we are ready to go at the Olympics,” Cho said.

For the first time in history, Korea will host the Luge World Cup starting from Friday until Sunday at the country’s only track for winter sliding sports.

The Alpensia Sliding Centre is newly built for the Olympics to host sliding events such as bobsleigh, skeleton and luge and is the 19th sliding track in the world built specifically for sliding sports.

Aileen Frisch who recently earned her Korean citizenship will be racing on the track for the first time representing Korea at the Luge World Cup on Friday.