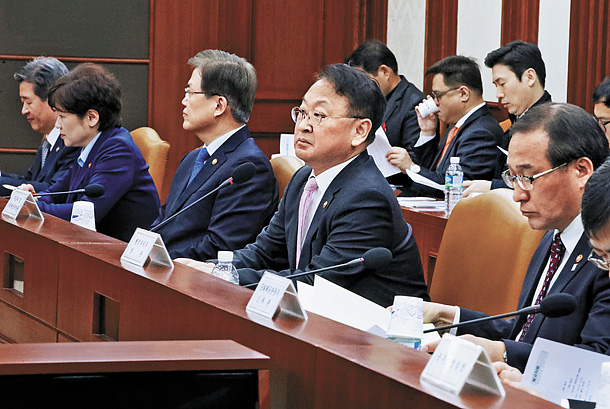 The Korean government will unveil measures later this month targeted at boosting the domestic economy, including increasing household incomes and easing spending on daily necessities amid local uncertainties.

“The expanding external uncertainties including the new U.S. government’s trade protectionism, the political risks in Europe and the North Korean missile provocation as well as the slowing domestic market especially in the service industry and consumer spending caused by rising oil prices, and interest hike as well as weakening confidence has been limiting our economic recovery,” said Deputy Prime Minister of Economics and Finance Minister Yoo Il-ho on Thursday during a meeting of economic ministers in Seoul.

“The government will strengthen policies that will boost the domestic market while improving the life of the public.”

Yoo, in particular, raised the importance of the job market.

“[The government] will push with policies such as fostering industries and expanding investments that will lead to creating more jobs as the job problem is the center of the public’s life,” Yoo said. “We will particularly focus our management on roughly 20 or so major job projects in areas like the energy, software and land and transportation sectors, whose job market creation impact is huge and where the public can actually feel the increase in job opportunities.”

One of the areas that the government hopes to increase is the tourist industry.

“We will diversify the market to Southeast Asia, the Middle East and Japan through developing a premium tourism program as our target for foreign tourists is set at 18 million,” Yoo said. He said the stronger support in the tourism industry will also lead to generating more job openings.

He said the details of the plan will be introduced next month but the government will evaluate the progress every quarter.

The government’s urgency comes at a time when Korea’s domestic economy has been considered to be moving toward its worst in recent years. According to the Bank of Korea, consumer sentiment in January was 93.3, continuing a downward spiral for the third consecutive month. But worst, this was the lowest since in nearly eight years when consumer sentiment was at 75.8 after the Korean economy was also hit by the global economic crisis.

The job market hasn’t been especially favorable. The manufacturing industry last month saw the number of people employed shrink by 160,000, the largest year-on-year drop in seven and half years. The last time the industry saw such cutbacks was in July 2009 when 173,000 jobs were lost.

One of the biggest reasons has been corporate restructuring, particularly in the shipping and shipbuilding industry. As a result, the overall unemployment rate rose 0.6 percentage points from December’s to 3.8 percent.

However, living expenses have been rising and it is expected to worsen with the recent outbreak of foot-and-mouth disease on farms.

Although the number of farms that have been infected hasn’t gone up since nine farms were been confirmed early this week, the culling of cattle has been driving up retail prices, adding to already burdening consumer prices.

There have been growing demands that the government should come up with more practical measures that would ease average household financial burdens.

Meanwhile Finance Minister Yoo expressed confidence that exports this month will continue the upbeat momentum of the last three months.

“The recent recovery of exports will likely continue for the fourth consecutive month,” Yoo said. To help this momentum continue the government will plan on holding a trade and investment promotion meeting.