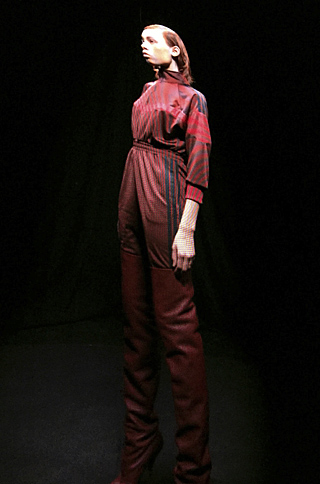 A model, wearing clothing by Kanye West, is projected on a giant screen during the unveiling of the Yeezy Season 5 collection during Fashion Week in New York on Wednesday. [AP/YONHAP]

NEW YORK - Kanye West did something unusual as a fashion designer: He wasted little time Wednesday in unveiling his Yeezy Season 5 collection, including new bulky, thick-soled Boost runners, as he projected models onto a huge four-sided screen in a dark boxy space, then sent out some to walk the regular way.

And then it was over, in 13 short minutes.

Always highly anticipated during New York Fashion Week, this time around West stayed in town after last season’s sweltering field trip last September to Roosevelt Island that had models and guests alike practically fainting from the heat. Some in the fashion elite had put him on notice they would walk out if he was hours behind schedule as in the past.

He wasn’t, and thank you, Kanye. And thank you for the serene music before the show.

Accompanied by wife Kim Kardashian West - who was dressed in a wine-red coat, top and pants - the rapper’s show was pitch black at the start, with views of the crowd obstructed by his giant video projection “box” at the center.

His on-screen models spun slowly all the way around and were followed by a regular floor finale in front of a slimmed-down crowd at the end.

She’s a Somali-American who was born in a Kenyan refugee camp and has just signed on with the agency IMG. Based in Minnesota, it was her first time walking in a show after she surfaced as a face to watch last November when she competed in the Miss Minnesota USA pageant in her hijab - and a burkini for the swimsuit competition.

Other West walkers, both men and women, wore jackets and other pieces emblazoned with a crouching cougar and the words “Calabasas” and “Lost Hills,” the latter a rumored Kanye-Drake music collaboration and the former hometown of his wife.

Another model wore an oversized camo jacket and matching thigh-high boots with dramatic folds at the front of a belt. Still more sported deep red sweatsuits, shearling coats and ‘90s-style looks that included denim jackets, and average-looking pants and boots.

In other words, the show was unusual for the huge video portion, but the clothes? Well, they were all so uncharacteristically normal. Comfy looking for sure.

West sent out as invitations various types of sweatshirts that read “Lost Hills” and “Mulholland.” He has used garments before to invite guests. This year he added a sultry zine by photographer Jackie Nickerson featuring Teyana Taylor and Sofia Richie in leotards, along with Los Angeles street scenes.