Qualifications of a leader

Qualifications of a leader 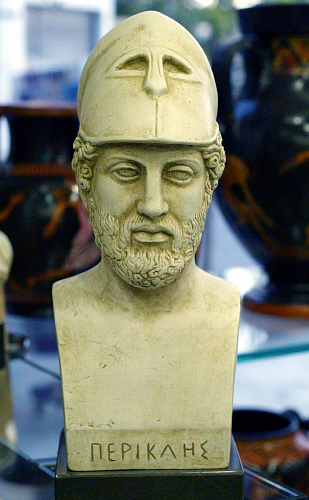 Ancient Greek leader Pericles refused to have his statue erected, although it was customary to set up one at the time. People urged him to build a statue whenever he made a great accomplishment, but he said he hoped to hear people say, “How come there is no statue of this great man?” rather than “Why are there so many statues of this man?”

Instead, he filled Acropolis with temples and statues of gods, and it remains a treasure of history today. Yet, his accomplishments did not go unnoticed. As he is praised for fostering democracy, his statues made later are displayed all around the world, including in the British Museum.

There is always a leader in our society, from the leaders of states and political parties to bosses at work. Social groups have organizers, alumni associations have presidents. The rise and fall of an organization depends on how a leader displays leadership and brings the members together.

But not all leaders have leadership. A leader gets respect when he or she acts like one. Once the leader prioritizes personal interests, the entire organization would be ruined. We’ve seen a president getting her hands on black money and a group leader running away with members’ money.

Also, an incompetent yet stubborn leader is just as problematic. When a boss gives an unreasonable order that workers cannot refuse, the organization suffers. It is the responsibility of the upper management to control and weed out incompetent intermediate leaders.

A more fundamental problem is the definition of a leader in Korean society. As Koreans are accustomed to vertical, hierarchical military culture, Koreans mistakenly believe that a leader is the ruler. So when one becomes a leader, he or she wrongfully believes to have seized power. So people try by every means possible to become a leader.

Of course, ruling and being ruled is an unavoidable reality in human society. But legitimacy of ruling is not automatically given. Authority does not come with fancy words or stubborn face. Such a leader cannot expect voluntary obedience. When a leader parades their own achievements, it takes away the chances for others to give credit. Pericles understood the truth early on.

Power gets bigger when shared. Hannah Arendt said that power and coercion are opposite, and when one is absolute, the other disappears. Power can rule a space, not time. Twenty-first century leadership calls for empathy and coordination as leadership qualities rather than ruling and coercion. Alex Ferguson, the legendary football head coach of Manchester United, wrote in “Leading” that his leadership secret was to plant respect — not fear — in the minds of the players. It is about time Korea has a leader who keeps their eyes on the people and inspires respect from them.


*The author is deputy editor of the JoongAng Sunday.