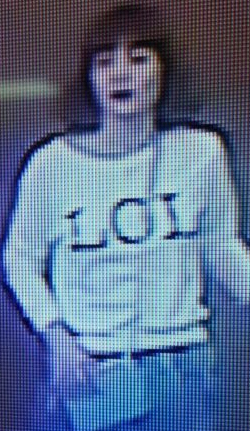 A screen grab from a CCTV footage featuring one of the two female suspects arrested for the assassination of Kim Jong-un's half brother Kim Jong-nam.

KUALA LUMPUR -- A second suspect has been arrested for the assassination of Kim Jong-un's half brother Kim Jong-nam, which took place Monday morning at Kuala Lumpur International Airport, according to Malaysian police Thursday.


Officers identified the alleged assassin as a 25-year-old woman with an Indonesian passport. It is not yet known whether she is actually an Indonesian national. Police said she was alone at the time of her arrest Thursday 2 a.m.

The first suspect, arrested at the same airport Wednesday morning at around 8:20 a.m., was in possession of a Vietnamese travel document but could not be confirmed as a Vietnamese national. Both suspects were "positively identified from the CCTV footage at the airport," said Malaysian authorities. 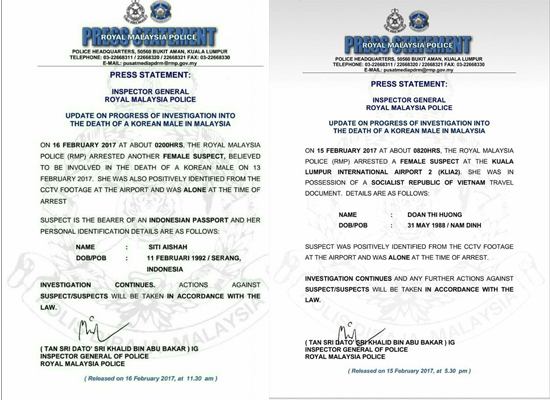 Police said they were after at least three more men.

It is unclear at this point precisely how many people were involved in the plot to kill Kim Jong-nam. South Korea's National Intelligence Service chief Lee Byung-ho told South Korean lawmakers Wednesday that two females had approached him at the airport and "terrorized him with poisonous liquid."

North Korean defectors who have knowledge of Pyongyang's intelligence maneuvers said in a recent interview with the JoongAng Ilbo, an affiliate of the Korea JoongAng Daily, that there was a high chance a "team" of agents were tasked with the order to kill him.

A post-mortem on Kim Jong-nam was finished Wednesday night at the Hospital Kuala Lumpur, but the results have not been revealed yet. The National Intelligence Service chief said he was not sure whether the toxic substance had been injected or sprayed.

Diplomats from the North Korean Embassy in Malaysia reportedly tried to block the autopsy and asked that the hospital hand over Kim Jong-nam's corpse, which Malaysian authorities rejected.

At least three embassy cars were spotted outside the hospital, including that of North Korean Ambassador to Malaysia Kang Chol.

According to details from the National Intelligence Service, Kim Jong-nam was at the Kuala Lumpur International Airport's departure hall Monday morning on his way to Macau, where his second wife and two children live, when two females poisoned him with a liquid substance.

He immediately asked for help at a nearby information desk and was transported to a clinic inside the airport, complaining of a headache. He died on his way to a nearby hospital in an airport ambulance car.

The two suspects immediately left the departure hall after the alleged attack and grabbed a taxi. One was caught on CCTV and was apprehended Wednesday morning at the same airport.