Second suspect is held in killing of Kim Jong-nam

Second suspect is held in killing of Kim Jong-nam 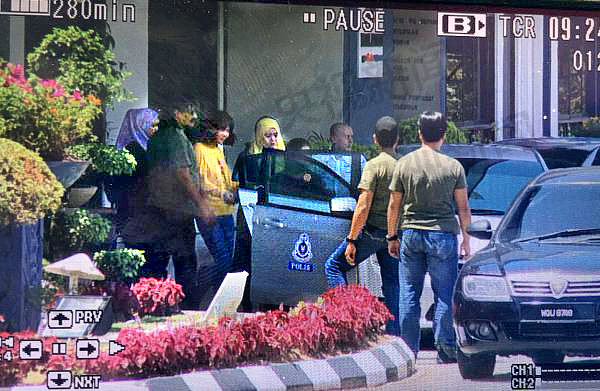 The second female suspect arrested for the assassination of Kim Jong-un’s half brother Kim Jong-nam, in a yellow shirt and blue pants, is led to a police car Thursday afternoon to be taken to a local police station in Malaysia. [SCREEN CAPTURE OF CHINA CENTRAL TELEVISION]

Officers identified the suspect as a 25-year-old woman with an Indonesian passport. It is not yet known whether she is actually an Indonesian national. Police said she was alone at the time of her arrest, Thursday at 2 a.m., but did not reveal where she was nabbed.

The first suspect, a 28-year-old arrested at the same Kuala Lumpur International Airport where Kim Jong-nam was killed Monday morning, was in possession of a Vietnamese travel document when police handcuffed her around 8:20 a.m. Wednesday, but could not be confirmed as Vietnamese.

Both suspects were “positively identified from CCTV footage at the airport,” said Malaysian authorities.

Police said they were tracking down at least four more male suspects.

It is unclear at this point precisely how many people were involved in the plot to kill Kim Jong-nam. South Korea’s National Intelligence Service (NIS) chief Lee Byung-ho told South Korean lawmakers Wednesday that two females had approached Kim Jong-nam at the airport and “terrorized him with poisonous liquid.”

North Korean defectors who have knowledge of Pyongyang’s intelligence maneuvers said in a recent interview with the JoongAng Ilbo, an affiliate of the Korea JoongAng Daily, that there was a high chance a “team” of agents were ordered to kill him.

A post-mortem of Kim Jong-nam was completed Wednesday night at the Hospital Kuala Lumpur in the Malaysian capital, but the results have not been released. A doctor who participated in the autopsy said, “There were no bruises on his body and his face was red,” according to the JoongAng Ilbo.

Diplomats from the North Korean Embassy in Malaysia reportedly tried to block the autopsy and asked the hospital to hand over Kim Jong-nam’s corpse, which Malaysian authorities rejected.

It is still not known why the 45-year-old self-exile from North Korea was killed or by whom, or why he was in Malaysia. Kim Jong-nam did not hold any official title in the North Korean government at the time of his death.

A South Korean intelligence official said Kim Jong-un might have ordered the assassination of Kim Jong-nam, the eldest son of former North Korean ruler Kim Jong-il, because he was afraid he could someday replace him with the backing of some force like the military or Pyongyang’s major ally, China.

The NIS chief said Kim Jong-nam was under the protection of Chinese authorities up to his death and that his former wife and son, currently residing in Beijing, as well as his second wife and two children in Macau, are still being looked after by them.

A South Korean official at the Ministry of Unification said China was friendly to Kim Jong-nam because “nobody could be certain that the Kim Jong-un regime would endure,” adding that Kim Jong-nam was some sort of a “Plan B” for Beijing.

Another intelligence source credited Kim Jong-nam’s “magnanimous” personality for winning the hearts of Chinese authorities. “China is based on feudalism, so they have a penchant for the eldest son,” he said. “He had a big heart, which attracted a lot of people. For Kim Jong-un, Kim Jong-nam had more leverage than a nuclear weapon.”

A young leader who’s executed 340 people over the past five years to solidify his control, based on a recent report from the NIS, Kim Jong-un could easily have found Kim Jong-nam a potential threat. Former leader Kim Jong-il, who was also intimidated by his own half brother Kim Pyong-il, groomed him as a diplomat and dispatched him to distant posts such as ambassador to Finland and the Czech Republic, analysts say.

An unexpected question has arisen about who will claim Kim Jong-nam’s corpse: North Korea or South Korea? South Korean media speculate that Seoul is flexing its diplomatic muscles to bring the corpse to the South, but the North is also on the case.

North Korean Ambassador to Malaysia Kang Chol personally visited Hospital Kuala Lumpur, where the post-mortem took place, with other diplomats Wednesday and stayed until late at night, demanding Malaysian authorities to allow him to escort the corpse back to Pyongyang.

Ambassador Kang was said to have kept silent about the fact that the deceased was the half brother of Kim Jong-un, saying instead he wanted to claim the body of “Kim Chol,” the alias used in Kim Jong-nam’s passport, simply because he was a North Korean citizen.

Malaysian Deputy Prime Minister Ahmad Zahid was reported by Malaysian news outlet Bernama as saying that the Malaysian government “would facilitate any request by North Korea to claim the body” in accordance with standard operation procedures.

“The body would be released to the next-of-kin or the embassy after all the police and medical procedures had been completed,” he said.

South Korea’s Ministry of Foreign Affairs refused to comment when asked whether Seoul was actually working to bring the corpse to the country, but left open the possibility.

“A corpse is normally repatriated to his or her country after [local authorities] verify the nationality of the deceased,” said a ministry source.

“But this is no normal situation.”

Yeom Don-jae, a visiting professor at Sungkyunkwan University in central Seoul, who formerly worked for the NIS, said diplomats from the North Korean Embassy would have no other choice but to express concern about Kim Jong-nam’s corpse because not doing so would be a kind of acknowledgement that they were behind his death.

“They could be attempting to conceal their links to the crime,” said Yeom, “by pretending to overreact about the family of their Great Leader.”

According to details from the NIS, Kim Jong-nam was at the Kuala Lumpur International Airport’s departure hall Monday morning on his way to Macau.