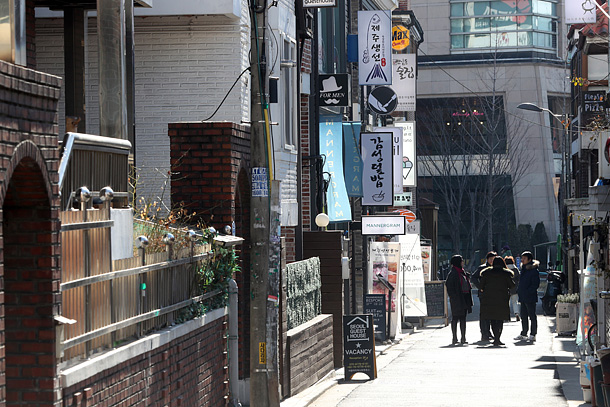 As multiplex homes concentrated in Yeonnam-dong, Mapo District, are being repurposed, placards now clutter the quiet streets. This is one neighborhood experiencing gentrification, resulting in increased rent. [KIM KYUNG-ROK]

Between the multiplex houses were the placards of cafes and restaurants cluttering the streets. Signs of renovation were apparent farther into the neighborhood. Gentrification is the name of the game. With the aging homes transforming into genteel cafes and restaurants, real estate prices have risen accordingly.

The recent gentrification of Yeonnam-dong, Mapo District, is peculiar. According to a research team led by Park Jin-a, professor at the urban planning and engineering department at Hanyang University, starting in 2010, gentrification in five areas of Seoul - Seochon, Gyeongridan-gil and Haebangchon in central Seoul; Seongsu-dong in eastern Seoul; Yeonnam-dong in western Seoul - is developing faster than it was 10 or so years ago.

One way to quantify gentrification is by measuring the number of Western restaurants and cafes entering a neighborhood, Park says. In neighborhoods that previously underwent gentrification such as Samcheong-dong, central Seoul, Hongdae, western Seoul, and Garosu-gil, southern Seoul, the average rate of increase in the opening of Western restaurants, cafes and bakeries was 17.3 percent, while Yeonnam-dong multiplied nearly twofold at 39.2 percent. 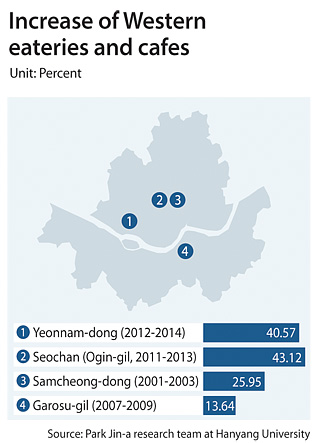 “There is a clear tendency for consumers to patronize quirky stores on quiet side-streets that are not well-known,” said Park. “With people quickly learning of neighborhoods through the influence of social networks, once quiet residential areas all of a sudden become a bustling shopping district with outsiders. Consumers then find another neighborhood and this [phenomenon] is repeated.”

“For three years, property values increased and renovation experienced a surge last February,” said one real estate agent in Yeonnam-dong. “The price of side-street houses experienced a rapid change with an average increase of two to three million won ($1,750 to 2,630) per 35.5 square feet. Homeowners are selling their houses and have started to leave while tenants have left as a result of higher security deposits or businesses entering.”

The old neighborhood of Yeonnam-dong is experiencing a period of revitalization, but the caveat is that higher real estate prices and the changing characteristics of the area are placing residences out of reach for longtime residents.

“Just last year, two supermarkets closed,” said a housewife who has resided in the neighborhood for 20 years. “In lieu of the butcher, a take-out restaurant stepped in,” she said, adding that “It has changed into a different neighborhood.”

“This quiet neighborhood has become noisy as outsiders have increased,” said Kim Jung-hyeon, 75, a resident of Yeonnam-dong. “My neighbor sold their home and left and I have placed my house on the market.” There is another issue in which businesses selling daily necessities to residents such as vegetable stores and dry cleaners have begun to disappear.

“Every two years since 2003, Paris investigates the type of businesses by neighborhood and, according to this data, vacant spaces are made into businesses that residents need such as bakeries by obtaining tenants through a variety of regulations placing importance on the types of businesses,” Professor Park said. “Seoul should consider introducing this.”