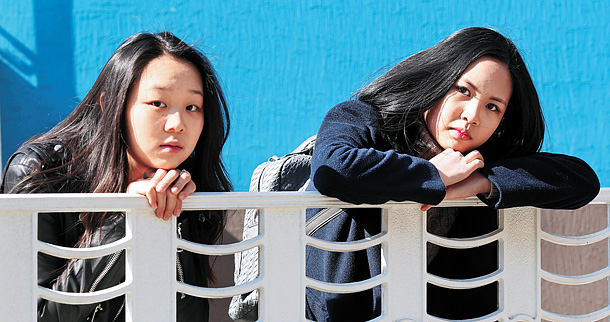 Karolina Lim, left, and Victoria Park, both 17, are descendants of Koreans who migrated to the Russian Far East and were deported to Central Asia. Many fourth-generation ethnic Koreans like Lim face deportation because they are not acknowledged as overseas Koreans by law. [KIM CHOON-SIK]

Eighty years have passed since the forced deportation of ethnic Koreans from the Russian Far East to what are today Kazakhstan and Uzbekistan. Many of their descendants have come from Central Asia to Korea - only to find that they don’t have a place in their ancestral land.

Karolina Lim is a 17-year old Korean-Uzbekistani. Her great grandfather was born in Busan in 1930.

Four years ago, her mother brought her to Korea to live and work. Her mother is eligible for an F-4 visa because she is a third-generation Korean.

Eligibility stops with the third generation. Lim is living in Ansan, Gyeonggi, on an F-1 visa as a daughter accompanying her mother. But at age 24 that kind of allowance ends and she will be ejected.

“I don’t want to go back to Uzbekistan,” says Lim.

The clock is ticking faster for Yulia Kim, an 18-year-old fourth-generation Korean-Uzbekistani. She came to Korea in 2013 accompanying her mother, who has an H-2 work visa issued to ethnic Koreans. Minors accompanying H-2 visa holders cannot stay in the country beyond the age of 19.

To qualify for an F-4 visa, ethnic Koreans must have either graduated from a Korean university or worked longer than three years in Korea in the manufacturing sector in a city with less than 200,000 residents - which rules out megacities like Seoul, Busan, Incheon, Daegu, Daejeon, Suwon and Ansan. Kim’s mother has not met those qualifications, so she can’t stay to the age of 24 like Lim.

The Act on the Immigration and Legal Status of Overseas Koreans grants overseas Korean status to ethnic Koreans up to the third generation only.

Many Koreans migrated to the Russian Far East in the late 1850s and 60s. After the Russo-Korean Treaty of 1884, Korean immigrants could gain citizenship of the Russian empire.

Vissarion Kim, a 67-year-old second-generation ethnic Korean, says he heard the tale of his father’s deportation many times.

His father was 15 in 1937, when he was deported with some 200,000 ethnic Koreans on a train. Each car carried four to five families, and the train ran for nearly one month. Some people perished from starvation or the cold during the ride. Their bodies were thrown from the train.

“They say that there were white bones of ethnic Koreans scattered along the black rail tracks,” Kim said.

The only way to survive, Kim said, was to assimilate to the new culture.

But decades on, many ethnic Koreans are now facing discrimination in their ancestral land.

The Act on the Immigration and Legal Status of Overseas Koreans established in 1992 acknowledges ethnic Koreans who migrated to the Russian Far East before the formation of the Korean government as overseas Koreans. But it only recognizes people with at least one parent or grandparent who maintained Korean citizenship, and only up to the third generation.

There are about 400 people registered at the center in Ansan who face deportation. The center estimates that there are a total of some 70,000 ethnic Koreans in the country facing deportation, including some 10,000 in Ansan.

“The rules must change so that the bar can be lowered for fourth-generation ethnic Koreans to procure permanent residency status,” said Kim Young-sook, director of a social welfare organization for ethnic Koreans in Ansan. “They must be allowed to stay in the country if they want to.”

“Ethnic Koreans are fellow Koreans, yet they are treated as foreigners by the law,” said Lim Chae-wan, head of the Overseas Koreans Research Institute. “The National Assembly must put forward new legislation for the ethnic Koreans so that they can be provided the right social welfare assistance when they come here to live.”

He added, “Accepting the ethnic Koreans will be beneficial for society in general, as they will also help with the state of low birthrate and aging population of this country.”