Getting real about China

Getting real about China 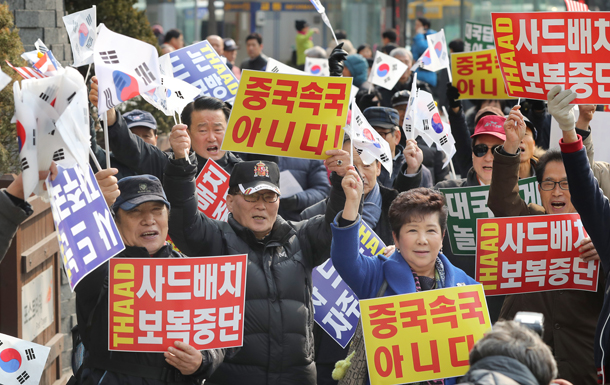 North Korea’s advances in nuclear arms and missile capabilities have been confirmed to have reached levels beyond imagination. Its escalated threat underscores the need for greater deterrence and the deployment of a powerful American defense system, Terminal High Altitude Area Defense (Thaad), in South Korea. It is a pity that immaturity in the government’s early handling and decision-making process has divided opinions among South Koreans and invited heavy punitive actions from Beijing. But what must be done must be done.

Beijing’s backlash over Thaad will only get worse. It will peak as the battery arrives in the country, and the ramifications may last a long time. The backlash could affect many parts of our economy, from culture to tourism. Smaller enterprises could be hard hit. In a survey of 300 members of the Korea Federation of Small Medium Enterprises, 26 percent said their trade had been damaged by China since the controversy over Thaad began.

Economic retaliation has moved onto administrative affairs from quarantine to customs and taxation. This was the same method Beijing used on Japanese companies in the past. Beijing stretches its policies to meet its political, economic or diplomatic needs. It eases regulations on foreign enterprises when it needs them for capital, technology and hiring. Once it has gotten what it needs, it toughens up on regulations and tax. Battered foreign companies have to choose whether to pack up and leave.

Even without Thaad, China would have shown its true face eventually. It may be best that we have seen it now rather than later. China has been consistently overbearing from ancient times. Chinese President Xi Jinping criticized U.S. counterpart Donald Trump’s protectionist trade policy and vowed to safeguard free trade. But in actuality, it too has been bullying and threatening its neighbor.

But China is too big to be neglected as a market. We must face the music and try to find a realistic solution. Korea Inc. and policymakers must redesign our business strategy in China to focus on areas Korea still has competitiveness. In many finished goods, China outstrips Korea. It is also catching up fast in components and parts.

Korea must be ready to yield in some areas to China as Japan had conceded to Korea. But we must keep ahead in high-end consumer products and components and parts. The list of Korea’s top products gives hope. Korea has maintained the world’s top rank in market share in about 70 products, beating German and Italian competitors over the last five years even after losing out to China in other areas.

The tvN hit drama “Goblin” should be a lesson to Korea Inc. Despite a government ban on Korean TV programs, the drama went viral in China. Korea has not earned money from the success because the program was viewed through illicit downloads. But it proves that sanctions and censorship cannot quell consumer desires.

China still lags far behind Korean in software and entertainment. Creativity and ingenuity cannot flourish under iron-fisted control and limited democracy. Korea was like that under authoritarian regimes in 1970s and 1980s. Korea must use this strength to maintain its advantage over China.

Lastly, forays into China should be done via strategic partnership with the government and private sector. The government and companies should share intelligence, experience, and research. The U.S. and Germany discuss with the business sector any changes in foreign policy. Korean companies could have been better prepared if they knew of the Thaad policy ahead of time.