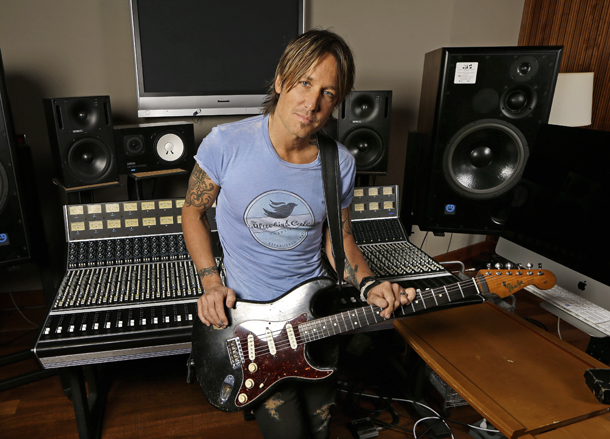 Keith Urban poses in Nashville, Tenn., to promote his latest album, “Ripcord.” Urban leads nominations for the Academy of Country Music Awards with seven nominations as both artist and producer for his record “Ripcord.” [AP/YONHAP]

NASHVILLE, Tenn. - Keith Urban’s boundary-pushing album “Ripcord” has spawned several top country singles and led him to pick up seven nominations including entertainer of the year and album of the year at this year’s Academy of Country Music Awards.

Lady Antebellum announced the nominations Thursday on “CBS This Morning” for the awards show, which will be held April in Las Vegas and aired live on CBS. Urban is also nominated for male vocalist of the year, single record of the year and song of the year.

With strong pop, dance and R&B influences, Urban’s album has dominated country radio over the past year, with four singles reaching the top six on Billboard’s Hot Country Songs chart.

Urban, who performed his newest single “The Fighter” at the Grammys last Sunday with Carrie Underwood, said the entertainer of the year nomination is an acknowledgement of great live performances.

“I have been a musician since I was six and playing on stage since I was like 7,” Urban told The Associated Press on Thursday. “I have always loved performing on stage, being an entertainer. So that category has always been the highest honor imaginable.”

He added that great performances are all about being “in the flow,” and mentioned Adele’s performance at the Grammys when she restarted her tribute to George Michael.

“She had this incredible courage to stop it in the middle of a live show and say, ‘Let me get this thing right,’” Urban said. “It was the most extraordinary thing I have ever seen on a live TV show.”

Competing with Urban for entertainer of the year will be last year’s winner, Jason Aldean, along with Luke Bryan, Florida Georgia Line and Underwood.

Florida Georgia Line and Tim McGraw both have five nominations each, including a shared nomination for vocal event of the year for their collaboration on the song “May We All.”