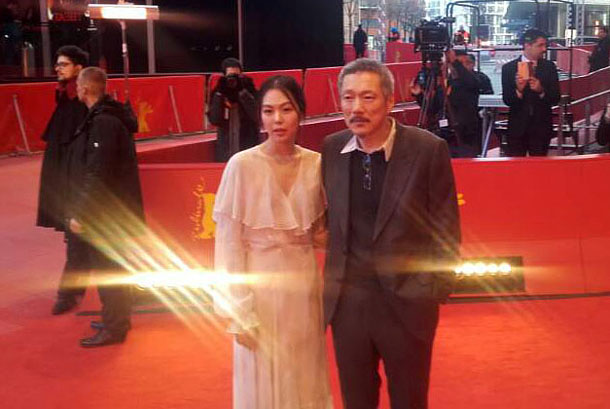 Renowned director Hong Sang-soo, 57, acknowledged having a “close relationship” with actress Kim Min-hee, 34, who has been engulfed in an extramarital relationship with the director since June. Hong and Kim made their first public appearance since the scandal broke out on Thursday local time at the Berlin International Film Festival, where the two held a press conference to promote their newest film “On the Beach at Night Alone” that has been nominated for the festival’s top prize.

Another romance movie mulling over what love is, Hong’s newest film revolves around a young actress (Kim) whose affair with a married filmmaker leaves her with heart-wrenching pain of loss and longing. Many have suspected the plot is a reflection of what Hong and Kim are going through in reality.

When asked about his relationship with Kim during the press event, Hong said, “Kim Min-hee and I have a very close relationship. That’s why I ask her for many opinions.”

Hong further said that it is true that his productions reflect himself because he created it, which means conversations between himself and Kim are included in the film.

Hong filed for divorce from his wife in November.

Meanwhile, it is Hong’s third time to be invited to Berlin in competition after “Night and Day” (2008) and “Nobody’s Daughter Haewon” (2013). For Kim, it is her first movie since she starred in the internationally acclaimed film “The Handmaiden” (2016), which was screened at the Cannes Film Festival last year.