Samsung not prepared for CEO vacuum

Samsung not prepared for CEO vacuum 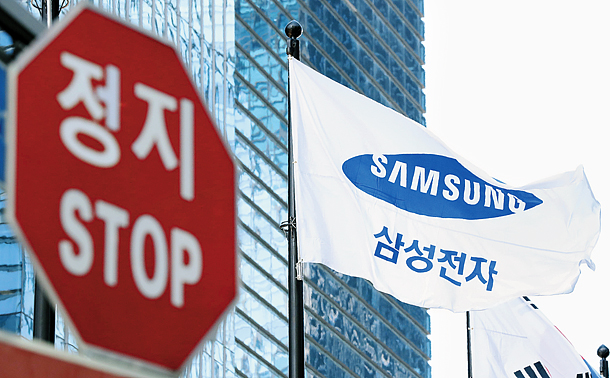 Samsung has yet to come up with an emergency plan for management in the absence of Vice Chairman Lee Jae-yong. [YONHAP]

The arrest of Samsung Electronics’ vice chairman and de facto chief Lee Jae-yong Friday on bribery and other charges has cast the country’s most valuable conglomerate into an unprecedented crisis.

The heir’s imprisonment, which will inevitably create a management vacuum, is expected to delay an untold number of management decisions at the Samsung empire. They range from a promised overhaul of its governance structure to facilitate his taking over from his bedridden father Chairman Lee Kun-hee to an annual reshuffle and investment plans that should have been executed late last year.

Most imminently, the chance of Harman International Industries’ shareholders voting against Samsung’s purchase of the U.S. automotive component and audio supplier has been raised. Shareholders of the Stamford, Connecticut-based company were scheduled to cast ballots Friday morning U.S. time. Results were not available at press time.

The Korean tech behemoth has been gulping up overseas companies of varying sizes and involved with varying technologies as it seeks to reduce its reliance on smartphones. Harman would have helped Samsung become a global leader in automotive parts.

Lee’s arrest will have no immediate impact on the credit rating of Samsung Electronics but could negatively impact investors’ sentiment in the short term, said Shelly Jang, director of Asia-Pacific Corporates at Fitch Ratings, in a report on Friday.

Samsung has yet to lay out how it will handle the 48-year-old vice chairman’s absence. It released a statement saying, “We will do our best to ensure that the truth is revealed in future court proceedings,” two hours after the court’s approval of Lee’s arrest.

“We don’t have any idea what to do at this moment,” said a Samsung spokesman.

The dismantling of Samsung’s future strategy office, which consists of patriarch Lee’s key aides, is unlikely to happen for the time being, even though Lee pledged to shut it down during the parliamentary hearing in December over the corruption scandal involving President Park Geun-hye and her friends.

From a realistic perspective, Samsung has no choice but to retain the controversial office, given it does not have an alternative leadership. What’s worse, the office’s top leaders - Choi Ji-sung and Jang Choong-ki - who long aided Chairman Lee have been investigated in the scandal and probably have criminal trials ahead of them.

By comparison, SK, Korea’s third-largest conglomerate after Samsung and Hyundai Motor, was quick to establish in 1989 a Supex (Super Excellent) Council, its highest decision-making body and collective management system. It consists of seven different committees to manage the company in the absence of its commander-in-chief.

Kim Sang-jo, chairman of civic group Solidarity for Economic Reform and a professor of economics at Hansung University in Seoul, said getting rid of Samsung’s future strategy office will become a mere gesture, adding that big companies in other advanced economies have similar unofficial body that back up the top decision maker. What’s more important is the office’s decisions becoming transparent and credible to regain trust from the general public.

The professor, who has been outspoken about Samsung’s need for reform, proposed that the Vice Chairman make a bold determination to seat “independent and trustable” outside figures on the board of directors and to have the future strategy office’s management decisions reviewed and approved.

“It’s important to make our society believe in Samsung,” he said.

Jang of Fitch Ratings said the crisis will prompt Samsung Electronics “to accelerate its efforts to improve management transparency and corporate governance.”

Other conglomerates - from SK to CJ, Lotte and Posco - are now worrying about becoming targets of investigation after Samsung. SK and CJ have allegedly had secret dealing with President Park (before her impeachment) over presidential pardons for their chairmen.