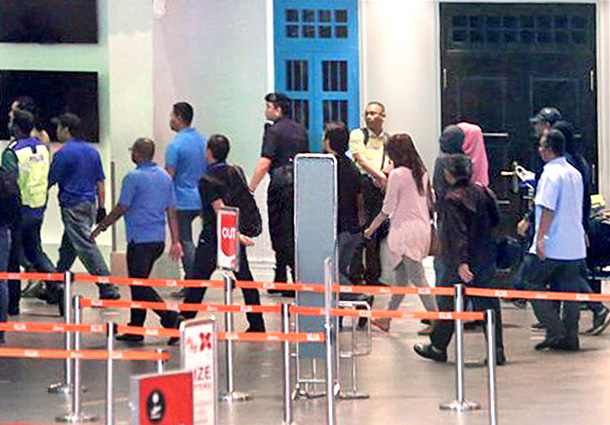 Two prime female suspects arrested in the assassination of North Korean leader Kim Jong-un’s half brother Kim Jong-nam are brought to Kuala Lumpur International Airport in the Malaysian capital Friday morning for an on-site reenactment of the crime. [SCREEN CAPTURE FROM WEIBO]

KUALA LUMPUR - Two prime female suspects arrested in the assassination of North Korean leader Kim Jong-un’s half brother Kim Jong-nam were brought to Kuala Lumpur International Airport in the Malaysian capital Friday morning for an on-site reenactment of the crime.

It is not yet known how the process went or how it will affect ongoing investigations by Malaysian authorities. Police refused to elaborate when asked by correspondents from the JoongAng Ilbo, an affiliate of the Korea JoongAng Daily. Malaysian police have yet to hold a single press briefing on the killing of Kim Jong-nam, which took place at the airport Monday morning.

Malaysian media reported Thursday that the second woman to be arrested after the killing was an Indonesian. The 25-year-old was nabbed by police earlier in the day with an Indonesian passport.

Boy Rafli Amar, public relations chief of Indonesia’s police, was quoted as saying that Indonesia would not interfere in the investigation and that it respected the legal process in Malaysia, according to Bernama, a Malaysian media outlet.

The first suspect, a 28-year-old arrested at the Kuala Lumpur International Airport two days after Kim Jong-nam was killed there, was in possession of a Vietnamese travel document when police handcuffed her around 8:20 a.m. Wednesday, but still hasn’t been confirmed as Vietnamese.

Bernama reported that Vietnamese authorities are working closely with their Malaysian counterparts to “clarify information” relating to the murder case but did not explain what was causing the delay.

Both suspects were alone and identified from CCTV footage at the airport, said Malaysian authorities. Police said they were tracking down at least four more male suspects.

The Star, another Malaysian news outlet, reported that the boyfriend of the second suspect was detained Thursday morning to assist police in the case but wasn’t a prime suspect. The newspaper cited a senior police officer saying “information that he gave led us to the arrest of the second woman.”

The man was identified as a 26-year-old Indonesian national believed to be self-employed.

All three have been remanded until Tuesday, according to Malaysian media.

If the Indonesian suspect was, in fact, involved in the assassination, it adds another question to the web of mysteries surrounding Kim’s death: why did Pyongyang hire foreigners?

A North Korean defector in South Korea who has knowledge of the communist regime’s intelligence tactics told the JoongAng Ilbo that a North Korean couldn’t have been able to pull off the job because they have so much reverence to the Kim dynasty, a result of ceaseless indoctrination from the North Korean leadership. That reverence extends to Kim Jong-nam, even though he was passed over as heir apparent and lived in self-exile outside North Korea.

Another enigma is why the first suspect reappeared at the same airport two days after the killing. While some media reports surmise she could have been trying to escape the country, a South Korean intelligence official said it was hard to believe any professionally trained killer would have dreamt of that scenario.

A post-mortem of Kim Jong-nam was completed Wednesday night at the Hospital Kuala Lumpur, but the results haven’t been released yet.

A medical staffer who participated in the autopsy told the JoongAng Ilbo that Kim Jong-nam’s face was “red.”

Early reports suggested Kim was poisoned, either by an injection or from an infused cloth held to his face.

Neither Malaysian police nor the Hospital Kuala Lumpur said when they will announce the results or what was causing the delay. When a JoongAng Ilbo correspondent called Abdul Samah Mat, police chief of Selangor, for a timeline, he did not provide one.

The Malaysian government’s Chemistry Department received “several samples of a product” from the police involved with the investigation but did not specify what it was, reported The Star.

The director of the department’s forensics division said the samples would be analyzed as soon as possible but declined to say what type of product it was or the number of samples delivered and whether the product was a liquid or poison, the newspaper wrote.

Kim Jong-nam was the eldest son of Kim Jong-il, who died in December 2011. Kim Jong-nam’s mother was Kim Jong-il’s first wife Sung Hae-rim, one of at least three women the former leader had children with.

Kim Jong-nam was widely considered the heir apparent of his father several years ago, and it remains uncertain what precisely caused his fall from grace.