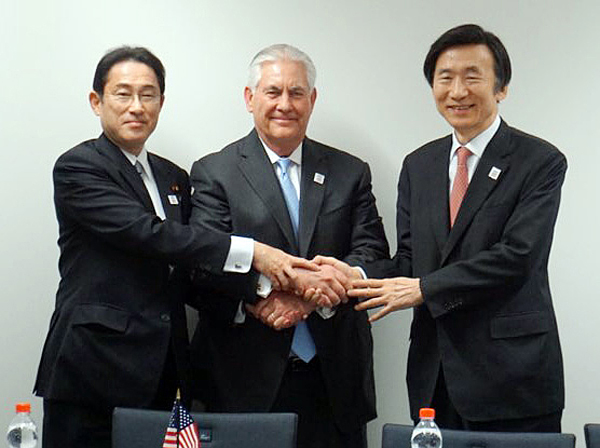 BONN, Germany - The top diplomats from South Korea, the United States and Japan condemned North Korea’s latest ballistic missile launch in the “strongest terms” Thursday, pledging to work together to respond to provocations by Pyongyang.

South Korean Foreign Minister Yun Byung-se, U.S. Secretary of State Rex Tillerson and Japanese Foreign Minister Fumio Kishida reached the agreement when they held talks on the sidelines of the Group of 20 foreign ministers’ gathering in the German city of Bonn, officials said.

It was the first time the three countries held foreign ministers’ talks since the inauguration of U.S. President Donald Trump. The meeting came days after the North carried out a ballistic missile launch, its first provocative act under the new U.S. administration.

“Secretary Tillerson reiterated that the United States remains steadfast in its defense commitments to its allies, the Republic of Korea and Japan, including the commitment to provide extended deterrence, backed by the full range of its nuclear and conventional defense capabilities,” it said.

The sides pledged to collaborate to ensure that all countries fully carry out U.N. Security Council sanctions on Pyongyang and that violations of Security Council resolutions will be met with an “even stronger international response,” according to the statement.

The top diplomats urged Pyongyang to refrain from provocative actions and “abandon its proscribed nuclear and ballistic missile programs in a complete, verifiable, and irreversible manner” and comply with all U.N. resolutions, the statement said.

“Only in this way can North Korea be accepted as a responsible member of the international community,” it said.

The sides also agreed to continue to draw international attention to the North’s “systemic, widespread, and gross violations” of human rights.

The ministers also directed their representatives on North Korea policy to hold consultations in the coming days regarding ballistic missile and nuclear challenges posed by the North, the statement said.

South Korea’s foreign ministry said in a separate statement that the latest talks sent out “grave and clear” warnings to North Korea amid the country’s continuing nuclear weapons development and missile launches.

“The Feb. 12 ballistic missile launch underlined the necessity for an extraordinary response to North Korea’s nuclear weapons program which is nearing its final stages of completion,” the statement quoted Yun as having said in the meeting.

The ministers shared the view that North Korea’s nuclear and missile programs pose a “direct and imminent threat” to all their countries, agreeing that they will apply even tougher pressure on North Korea in order to induce Pyongyang to denuclearize.

They also agreed to work closely together to get China to play a greater role in the denuclearization efforts, the statement said.