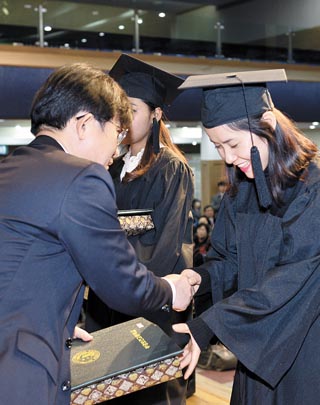 Li Dan, a 35-year-old Chinese woman who was one of the oldest graduates during a ceremony at Bukyung Health High School in Busan recently, moved to Korea in 2004 after she married a Korean man.

She first worked 10 hours a day at a food factory, but only made 1.3 million won ($1,134) per month, which was not enough to support her two sons and sick parents-in-laws. Her husband started working as a fisherman in 2012.

“I used to do physically laborious jobs,” Li said, “Then I thought I needed to learn some skills. This is why I entered high school and will go on to attend college. I want to discover my maximum potential.”

Li says she plans to attend Dong-Eui Institute of Technology in Busan with a major in Chinese and Tourism.

Back in 2015, Li made her mind up to change her job and applied to Bukyung Health High School.

She took interest in hair dressing and cosmetic courses at first, but later was more drawn to language learning, acquiring Korean and English skills. During the daytime, she worked for 10 hours and then went to school to take evening courses from 6 p.m. to 9 p.m.

Once home, she has to do household chores and take care of her two sons, who are five and nine years old.

“My eldest son is in second grade, but I found it hard to understand his homework and other statements from teachers,” she said, “So I thought I need to learn more.”

Since the Chinese department at Dong-Eui Institute of Technology has daytime courses, she had to quit her job, but thought of it as a long-term investment.

“I believe I can find some way as I try one thing and another,” she said, “It is better to try and then regret then never to try at all.”