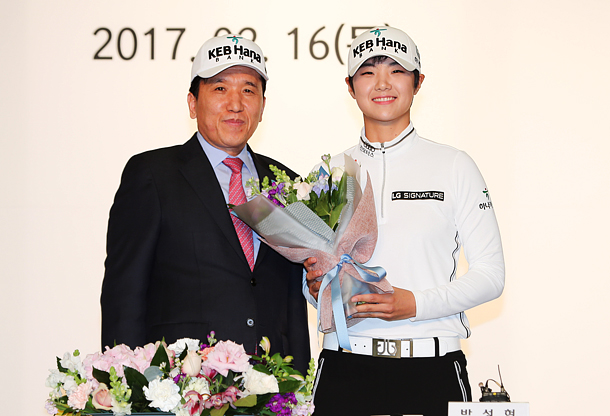 Golfer Park Sung-hyun might be a newcomer to the LPGA, but the super rookie, currently ranked 10th in the world, has big ambitions.

“In four years, I want to become the world’s top female golfer,” she said during a signing ceremony with KEB Hana Bank, her new sponsor, on Thursday.

For the next two years, Park will be playing on the LPGA Tour wearing KEB Hana Bank’s red and green logo.

“I’m happy that I got to sign the contract before my first tournament,” she said.

Park had an outstanding season in the KLPGA last year, winning seven tournaments on the Korean tour, the most among all players, and led in multiple categories including scoring average, driving distance and official money ranking.

She was invited to seven LPGA tournaments, including four major events - the ANA Inspiration, U.S. Women’s Open, RICOH Women’s British Open and Evian Championship - and finished within the top 25 on the money list, earning her a full-time spot on the American circuit.

In December, she moved to Florida and under her new coach, Brian Mogg, made adjustments to her swing and her equipment.

“I focused a lot on short game since that is my weakness,” Park said. “I also tried to play on different courses because the grass is different in the United States from Korea.”

Park said the thought of being the world’s top female golfer struck her while watching the Rio Olympics earlier this year. “Although Lydio Ko, currently No. 1, is younger than me, I think there’s so much to learn from her,” she said, “like her work ethic.”

Indeed, Park seems to be hitting the ground running. She’ll be leaving for Singapore on Feb. 25 to prepare for her LPGA Tour debut, the HSBC Women’s Champions which starts on March 2.

“Since this is my first tournament of the season, I don’t think I need to rush for a good result,“ she said. “My goal is to finish in the top 15.”