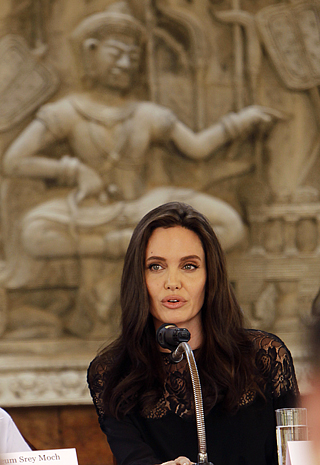 Angelina Jolie holds a press conference on Saturday in Siem Reap, Cambodia, where she filmed “First They Killed My Father.” [AP/YONHAP]

SIEM REAP, Cambodia - Angelina Jolie said Saturday that she hopes her new film about Cambodia under the Khmer Rouge will help educate the world about the brutality of the 1970s regime and shed a light on the plight of young people in war zones today.

“First They Killed My Father” is based on author and human rights activist Loung Ung’s account of her survival as a child under the 1975-79 communist Khmer Rouge regime, believed to be responsible for the deaths of 1.7 million Cambodians from starvation, disease and execution.

Speaking at a news conference ahead of the film’s premiere, the actress-turned-director said she hopes the movie will “remind everybody that there are little Loungs all around the world today” in various war zones and corners of the world.

“Her story is their story and so this is, in many ways, universal, and we hope that that is something that you think about as well,” said Jolie, who directed the film and co-wrote the screenplay with Loung.

Jolie has had an affinity for Cambodia since she began goodwill work for the U.N.’s refugee agency in 2001, and her eldest son, Maddox, 15, was adopted from the country. She also has established a foundation to promote social development in rural Cambodia.

However, the Hollywood superstar stressed that Cambodia’s history is not just the war.

“I hope that the young people, when they see this film, that yes, they will learn part of their history, but I hope they also see - I hope all of you see - that this is a country of talent and art and love and beauty,” Jolie said.

Maddox worked on the production of the movie, which was shot on location in Cambodia in late 2015 and early 2016. Jolie said that Maddox is very proud of his Cambodian heritage and that she and her children see Cambodia as their “second home.”

The film, a Netflix original production, will be shown on the streaming service later this year.

Jolie’s previous directorial projects include the 2015 marriage drama “By the Sea,” in which she starred alongside then-husband Brad Pitt, and the 2014 survival story “Unbroken.” AP