Boiling point or time to thaw?

Boiling point or time to thaw? 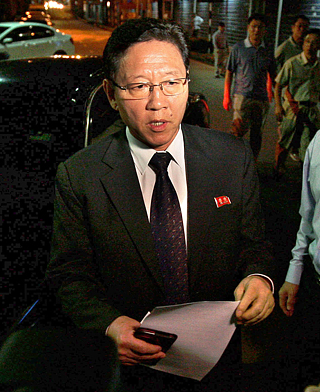 Kim Jong-nam, eldest son of Kim Jong-il, was assassinated. At the scene of the drama in Kuala Lumpur, the media are busy investigating.
Kim entered Malaysia on Feb. 6. He was carrying a North Korean passport under the name of Kim Cheol. He had double identities. On the morning of Feb. 13, he was poisoned at the airport check-in counter on his way to Macau. He went to the airport clinic and showed difficulty breathing. The local police initially thought that he had died suddenly. In reality, no one would suspect a poisoning terror attack.

National Intelligence Service chief Lee Byung-ho, who served as the ambassador to Malaysia for three years, told the National Assembly on Feb. 15 that the agency learned of the situation the day of the incident. Lee is an intelligence expert who has published a book on Israeli intelligence agency Mossad.

The first report on the assassination was aired on television news. Reports indicated that North Korean Worker’s Party chairman Kim Jong-un eliminated his half-brother, a potential rival. At 11 p.m., Malaysian police released documents indicating the death of a North Korean man named Kim Cheol, born in 1970, and a request for an autopsy.

About five hours after the initial report, China reacted through the WeChat account operated by the international edition of Chinese state organ People’s Daily. It was a semi-official response. “Why was it reported in Korea first, not Malaysia?” “It will help the conservatives in Korea.” “The timing is strange. … The purpose is Thaad deployment.” “We shouldn’t dance along with Korea.” Conspiracy theories prevail in China.

The North moved as well. They used diplomatic channels to prevent an autopsy and demanded the body be handed over. On Feb. 15, the North Korean Ambassador arrived at the autopsy site, but had been conducted.

There are conspiracy theories in Kuala Lumpur as well. Four days after the incident, Nanyang Siang Pau reported a short article titled “Are Korea and Japan Real Culprits?” It gave four reasons: Kim Jong-un does not have a motive. Kim Jong-nam had already acknowledged defeat and given up power. Kim Jong-nam and Kim Jong-un have shared interests. The assassination of Kim Jong-nam is likely to be a trap to accuse Kim Jong-un.

On the same day, China focused on the report in Korea that Pyongyang made a move as Kim Jong-nam recently sought asylum in Korea. Even if the North actually ordered a hit on Kim, Korea is accountable as well.

103 years ago, the Crown Prince of Austria was shot in a foreign country, and the nationalism that swept Europe led to World War I.

Millions of soldiers were killed. Yet another “crown prince” has been poisoned. It is up to the people that remain to make it a catalyst for World War III or a chance to bring the thawing season.


*The author is a Beijing correspondent of the JoongAng Ilbo.