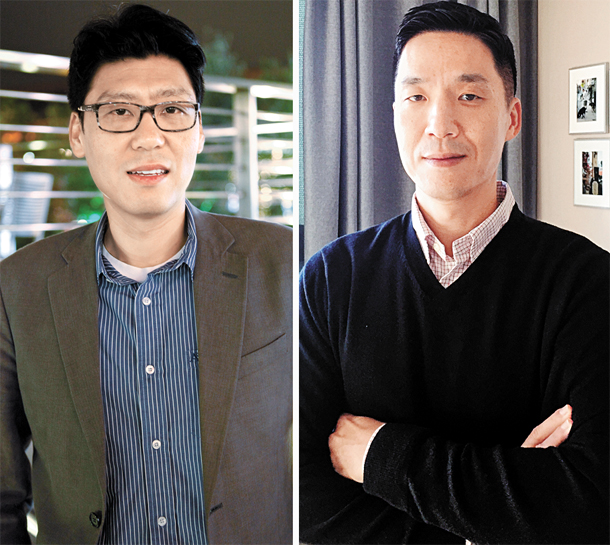 Co-founders John Nahm, left, and Bae Ki-hong of seed fund Strong Ventures. The two were close friends from elementary school when they lived on a small island in Spain.[JOONGANG ILBO]

All three of these promising start-ups received initial support from the California-based seed fund, Strong Ventures.

The main role of a seed fund, a type of venture capital firm, is to finance and support early stage start-ups so they can build their businesses on a more solid foundation.

Strong Ventures was founded in 2012 and operates one office in Los Angeles and another in Seoul. Over the last five years, it invested in over 70 start-ups both in the United States and Korea and a number of them grew to be successful.

“People in LA are as interested in opening new businesses as those in Silicon Valley,” says John Nahm, the 43-year-old co-founder of Strong Ventures, who currently manages the LA office.

“It is our goal to introduce Korea-born start-ups to the U.S. and help U.S.-based start-ups enter Asian markets through Korea,” added the other co-founder Bae Ki-hong, also 43, who heads the Seoul office.

The risks for Strong Venture are higher as it backs start-ups at their earliest stage. But it gets high returns when successful. The seed money put into Recomio brought a return nine to 10 times larger, according to the co-founders.

Nahm and Bae say the most important factor in an investment is the personality of an entrepreneur. That is a lesson learned through trial and errors.

“At first, we used to prioritize start-ups’ products and their target markets and frankly we sometimes even relied on entrepreneurs’ academic backgrounds for our investments,” said Bae.

“But the successful entrepreneurs turned out to be people with outstanding personality and strong will rather than good academic backgrounds. I am confident that the most important part of investing is finding out what kind of persons the start-up’s founders are.”

“There are times instinct tells you to choose this person, though you are not sure what this person would actually do with the investment,” Bae added. “In those cases, there’s a high chance of success.”

Strong Ventures also helps their start-ups break into global markets, but the founders warn that the U.S., for instance, may be a big market, but it’s difficult for businesses to survive there.

“People tend to think they must go global because the Korean market is too small, but that can become an obsession,” Nahm said. “The Korean market is not as small as it seems. Entrepreneurs aiming to go overseas need to first assess whether they can successfully establish a business in the U.S. based on their capabilities.”

Bae said that while the level of Korean entrepreneurs has gone up, they are still weak on details.

“Sometimes, the founders don’t know the details of the service they are providing and say, ‘That’s the technical directors’ responsibility,’” Bae added. “I would like to advise entrepreneurs to work on the details and their executive ability before dreaming of entering global markets.”

The two founders are old playmates. They went to elementary school together on Las Palmas, a small island in Spain. “Both of our fathers worked for a fisheries company,” Bae said. “Later I went back to Korea with my father, but we were close enough to keep contact through letters.”

The two met again in Silicon Valley in 2000 during the start-up boom. Nahm, who worked at the United Nations headquarters in New York, quit to work for Dialpad, a start-up founded by Korean-American technicians, which offered a voice-over-the-internet-protocol service.

Bae, who had graduated from Stanford University, entered the Wharton business school at the University of Pennsylvania. He dropped out after the first semester to join a start-up called Musicshake.

The two old chums decided to open a venture capital firm that provides investment for other start-ups in 2012. They figured they were better at helping others do business than doing business themselves.

Bae, who had already published a book entitled “Start-up Bible” based on his experience as an entrepreneur, was used to mentoring other start-ups. The decision to start a seed fund that gives 100 million ($87,000) to 200 million won seed money to early stage start-ups was a result of his own experiences.

Why open in LA rather than Silicon Valley, the start-up epicenter?

“We thought LA would be a better option than Silicon Valley because our basic focus was funding Korean-American entrepreneurs,” Nahm said. Silicon Valley already is loaded with venture capitalists and LA is home to the most number of Koreans in the outside world.

Also, U.S. branches of major Korean IT companies including Kakao, NHN and Nexon are in LA.

“LA is the third-largest start-up hub in the U.S. after Silicon Valley and New York,” Nahm added. “It is also home to a number of successful start-ups such as Snapchat and Riot Games.”