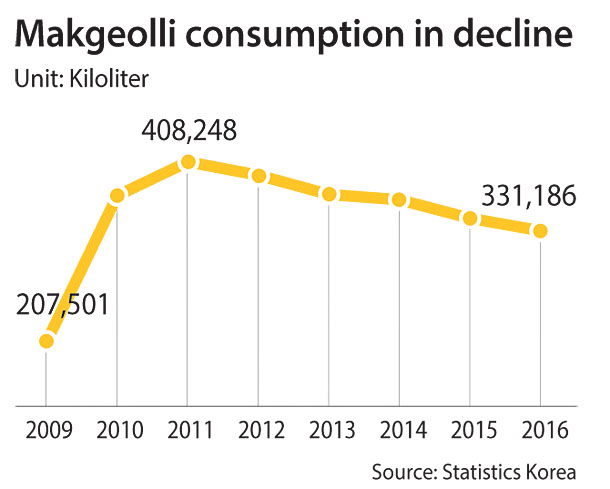 Brewers of makgeolli, the Korean liquor known for its milky-white color, sweet taste and traditionally as the “drink of farmers,” are hoping to break through sluggish sales by adding a fruity twist to this traditional liquor.

Industry leader Kooksoondang Brewery was the first to see commercial success with this variation. Its Kooksoondang Ssal Flavor series, with flavors like banana, peach and even cream cheese, sold five million bottles in the first 10 months after its release last year.

The fruity makgeolli was particularly popular among younger consumers who generally consider the drink outdated and old-fashioned. Kooksoondang specifically targeted people in their 20s and 30s, even conducting a successful social media campaign, rare for a dated drink like makgeolli.

Since the first flavor in the series, banana, was released in April, Kooksoondang’s competitors started producing their own flavored makgeolli. Soon, there was grape from Gyeongju Beopju and melon from Bae Doga. 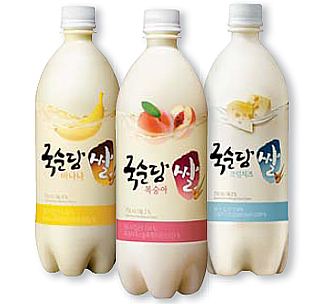 The breweries are doing more than just flavoring their drinks. They’re also cutting down the alcohol content to appeal to younger drinkers. The fruity makgeolli all contain 3 to 4 percent alcohol, lower than the average 6 percent in traditional makgeolli. It’s similar to the fruit trend sweeping the soju industry in the past few years, where manufacturers are producing fruit-flavored soju with lower alcohol content. But while soju makers were generating fruity drinks, makgeolli brewers were slower to match changing tastes.

Makgeolli’s golden age is said to be the late 2000s, when the government decided to make it a chief export item. Consumption doubled from 2009 to 2011 and reached an all-time high of 408 million liters that year. But in the following five years, consumption continually fell until it reached 331 million liters last year.

Industry analysts believe makgeolli lost out to soju because soju makers managed to contemporize their image with new flavors. The drink also struggled against beer, with its craft and imported varieties.

But oddly enough, fruity makgeolli actually preceded the fruity soju produced by breweries. That’s because many restaurants and pubs would frequently mix traditional makgeolli with fruit to create their own cocktails. Makers of makgeolli and soju were likely inspired by these concoctions.

Makgeolli brewers blame government regulations for the delay in updating their drinks, saying it blocked companies from making earlier attempts. The current law states that makgeolli cannot contain more than 20 percent juice. If it does, it is no longer legally considered makgeolli and cannot receive a special tax that is granted to the traditional drink. So even though the public knows Kooksoondang’s Ssal Flavor series as makgeolli, the government does not recognize it as such, making the drink more expensive than traditional makgeolli.