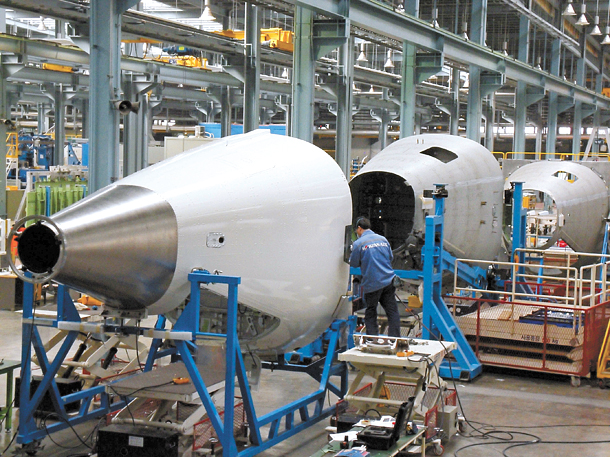 A Korean Air technician inspects a Boeing 787’s afterbody, the rear part of the plane, at the company’s Busan Tech Center. [KOREAN AIR]

Inside a room at the Busan Tech Center, about a 15-minute drive from Gimhae International Airport, a nozzle sprays black composite material on a large cone-shaped piece of metal that would eventually become the afterbody, or rear end, of a Boeing 787-9.

“We have to keep this room extra clean because even a tiny particle added to the composite material could cause product defects and force us to scrap the part in the end,” said Ryu Hwa-soo, general manager at the center’s commercial aerospace plant. The room was open for just a couple of minutes to give visiting reporters a peek before it was quickly closed.

Along with the afterbody, Korean Air produces four other parts at the facility: the raked wingtip, which reduces air resistance on the wing; the stringer, which serves as the “bone” for the fuselage; flap support fairing underneath the wing; and the after wheel well bulkhead at the fuselage’s center. All are used in the Boeing 787-9, also known as the Dreamliner.

Korean Air has been supplying parts for Boeing’s 787 series since 2006. While the airline is known for being the country’s largest passenger and cargo carrier, its business of producing parts and certain aircraft like helicopters dates back over 40 years with the establishment of the Busan Tech Center in 1976. Until about five years ago, the center had operated in secret because it developed military planes such as fighter jets.

Over 2,700 employees work in 66 buildings spread across 175 acres of land at the facility. The largest source of profit is parts production for commercial planes like the Dreamliner.

By the end of this year, Korean Air plans to add five Dreamliners to its own fleet. The first plane, to be delivered by Feb. 27, will likely be used on its new route to Barcelona, Spain, when it opens in April, a spokesman said.

“We plan to place the plane on a popular route so that users can experience the plane’s upgraded comfort from the beginning,” the spokesman said. “Detailed features and services to be offered will be released when the plane is officially here on Feb. 27.”

The jet also emits less carbon dioxide and offers a better in-flight experience with fewer noise, improved humidity and bigger windows, according to Boeing. The Dreamliner can carry about 30 more passengers than its predecessor.

In the past, Korean Air only manufactured parts using manuals from aircraft manufacturers after they were developed. Since 2004, Korean Air has been working with Boeing on an international co-development project, where the airline started designing parts itself. In 2010, Korean Air entered a similar project with Airbus, boosting its presence in the world’s aero structure design and supplying market.

“Shipbuilding used to be a strong business in Korea, and then automaking,” said Choi Ho-kyung, managing vice president at Korean Air. “Now, we believe the future is in the skies. We hope to make this business our future growth engine and will also focus on developing unmanned aerial vehicles.”

Korean Air is currently mass producing unmanned planes for military use. Its first delivery will be in the middle of the year, the company said.