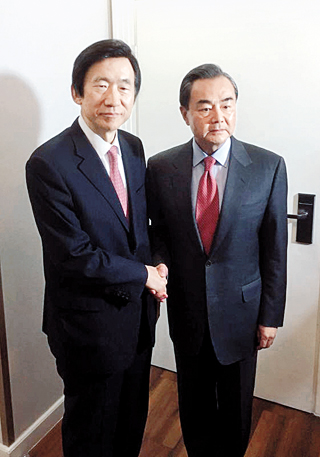 China said it would suspend all imports of coal from North Korea for the rest of the year, putting it further in line with UN Security Council sanctions meant to curb Pyongyang’s nuclear and missile weapons program.

The Chinese Commerce Ministry said Saturday that the ban, which went into effect Sunday, would last through Dec. 31, which comes after Pyongyang’s universally condemned intermediate ballistic missile launch one week ago.

After Pyongyang conducted its fifth nuclear test in September, the Security Council adopted Resolution 2321 in November, closing any loopholes in pre-existing sanctions.

If Beijing follows through with the ban, it can have a serious impact on Pyongyang’s ability to earn revenue because coal is estimated to be around 40 percent of North Korea’s exports to China, according to analysts.

This latest measure is said by diplomatic sources to be a result of long discussion between Beijing and Washington following North Korea’s nuclear test in September.

The coal ban follows Pyongyang’s latest ballistic missile launch on Feb. 12, which led the 15-member Security Council to adopt a unanimous statement the following day condemning the North for the test. The council said the launch violated UN resolutions.

The ban also comes after news broke Tuesday that North Korean leader Kim Jong-un’s older half brother, Kim Jong-nam, was assassinated in Kuala Lumpur the previous day. The estranged older brother had been under the Chinese government’s protection and favored by Beijing.

The Chinese government announced the ban as its top diplomat was wrapping up a three-day security conference in Munich, where North Korea was a key issue. On Saturday in Germany, Chinese Foreign Minister Wang Yi and his South Korean counterpart Yun Byung-se held a bilateral foreign ministerial meeting on the sidelines of the security conference, struggling to find common ground over the controversial issue of deploying the U.S.-led Terminal High Altitude Area Defense (Thaad) antimissile system in Korea, a decision that China objects.

During the talks, Yun is said to have expressed “strong concern” about increasing restrictions on economic and cultural activities by Korean companies operating in China. He went on to urge China to “take appropriate measures” to resolve the situation. But Wang maintained that the Chinese government had not taken any sort of retaliatory measures against Korea.

This was the first time South Korea’s foreign minister brought the issue to Wang.

Yun emphasized Seoul’s position that deploying Thaad is a self-defense measure against North Korean threats. “It is not meant to target a third country,” he said.

Wang responded that while China understands Seoul needs to protect its own security, it should not come at the expense of harming another country’s security.

Yun pointed out that the North’s intermediate ballistic missile launch on Feb. 12 once again showed the “actual and imminent threat of North Korea’s nuclear and missile program” and was an opportunity to confirm the necessity of deploying Thaad. He went on to emphasize the importance of China’s active role in the implementation of UN Security Council resolutions and pressuring North Korea. Yun also said Seoul positively evaluated the Chinese Commerce Ministry’s ban on Pyongyang’s coal exports.

The bilateral meeting was arranged upon the request of China.

Yun and Wang’s recent bilateral talks have been tense, especially one that took place in Vientiane, Laos, last July on the sidelines of an Asean meeting, which came right after Seoul and Washington decided to deploy the Thaad battery in Korea.

But China’s latest coal ban and consensus that the two sides will collaborate on North Korea softened the tone of the meeting. The two ministers addressed each other as “old friends.”