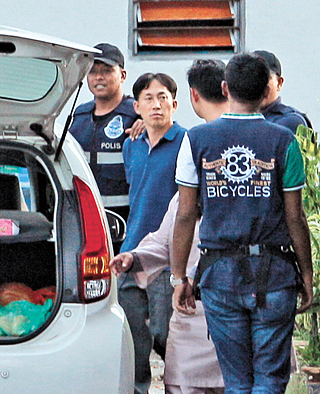 A 46-year-old North Korean man named Ri Jong-chol was arrested on Friday as the fourth suspect in connection with the assassination of Kim Jong-nam. [YONHAP]

Tan Sri Noor Rashid Ibrahim, deputy inspector general of the Malaysian police, said Malaysian authorities were “cooperating with Interpol and other relevant bodies in the region” to track them down.

The statement was relayed during the first press conference organized by Malaysian police since Kim Jong-nam was killed in the Malaysian capital a week ago. 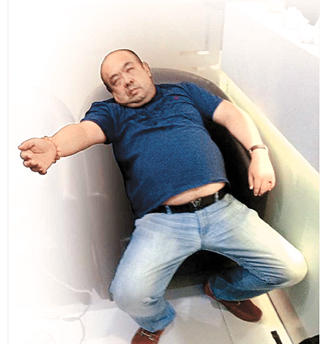 Kim Jong-nam is seen slumped in a chair at Kuala Lumpur International Airport moments before his death on Feb. 13. [MALAYSIAN POLICE]

Police are also searching for three other people to assist in the probe, he said.

Noor Rashid refrained from confirming whether the man killed at the airport last Monday was indeed Kim Jong-nam, stressing that his family had to come forward with a DNA sample first before making such a conclusion, a necessary procedure in Malaysian law.

The eldest son of former North Korean leader Kim Jong-il, Kim Jong-nam is known to be survived by his former wife and son, who live in Beijing, and a second wife and two children who live in Macau. None of his family has reached out to the Malaysian police yet, Noor Rashid said.

An autopsy on Kim Jong-nam was completed last week at Hospital Kuala Lumpur, but doctors have yet to pass the results on to police, Noor Rashid said. He added that he could not provide any details yet on what precisely killed Kim.

Noor Rashid refused to comment on some media reports that claimed one of the three non-North Korean suspects arrested last week thought she was involved in a “prank” and did not mean to kill Kim Jong-nam.

In response to Noor Rashid’s press conference Sunday, South Korea’s Ministry of Unification said its government was “certain” that the murdered man was Kim Jong-nam “based on several pieces of information and circumstances.”

“In light of the fact that the five suspects are North Korean nationals, we believe that the North Korean regime was behind this case,” the ministry said in a statement.

Four people have been arrested so far in the probe.

A 27-year-old Vietnamese woman was apprehended Wednesday at Kuala Lumpur International Airport. Malaysian police confirmed during the Sunday press briefing that she was a Vietnamese national who works for an entertainment company, adding that she arrived from Hanoi on Feb. 4 and had planned to return on Feb. 23.

Other suspects include a 26-year-old Malaysian man and a 25-year-old Indonesian woman who arrived in Malaysia on Feb. 2 and planned to leave on Feb. 23.

The latest suspect to be held in police custody is a 47-year-old North Korean man named Ri Jong-chol, who arrived in Malaysia on Aug. 6, and had been working for an IT company in Kuala Lumpur.

According to unnamed sources from The Star, a media outlet in Malaysia, Ri was from Pyongyang and studied science and medicine at a North Korean university. He graduated in 2000 and “has expertise in chemistry,” they said.

For about 10 years after graduating from college, Ri worked at a research center in Kolkata, India, until 2011, then returned to Pyongyang and received an offer to work for an IT company based in Malaysia, The Star reported.

Officials from the North Korean Embassy in Malaysia requested they personally meet him, but police rejected the request, the Malaysian newspaper wrote.

Malaysian police said they will give priority to Kim Jong-nam’s family to claim his body from forensic officials, placing them before the North Korean Embassy.

Breaking days of silence on Friday night, North Korea’s ambassador to Malaysia, Kang Chol, stood stern-faced in front of journalists outside the Hospital Kuala Lumpur mortuary, where the body of Kim Jong-nam remains, to publicly express his outrage over the Malaysian police’s investigations, threatening at one point to sue the Malaysian authorities in international court. Ambassador Kang said North Korea would not accept the post-mortem results because the process had been forced through despite their rejection.

“This is the culmination of the violation of the human rights and infringing upon our citizen disregarding the elementary international laws and consular laws,” The Star quoted the top envoy as saying. “Today, I met with the high officer of the Malaysian police and strongly demanded him to release the body without further delay, but he rejected our demand.”

The ambassador accused Malaysia of “trying to conceal something” and “colluding with the hostile forces” to “besmirch the image” of North Korea by “politicizing this incident.”

Kang did not explicitly say who those hostile forces were, but all signs pointed to South Korea.

“The South Korean puppet authorities are desperate to escape from their miserable state of the largest-ever political scandal,” Kang said. “They are distorting the public opinion, resorting to the tricky plots to defame the image of the DPRK with this incident.”

The DPRK is an acronym of North Korea’s official name, the Democratic People’s Republic of Korea.

“We have rules in Malaysia,” the police chief was quoted as saying. “While in Malaysia, everyone has to obey and follow our rules and regulations. … That includes North Korea.”

Pointing out that Pyongyang has a history of “crimes against humanity and terrorism,” the South Korean government said in a statement Sunday that Seoul will monitor the case with “great concern and caution,” adding that the latest case goes to show how “reckless and cruel” North Korea is.

Kim Jong-nam was at Kuala Lumpur International Airport on Feb. 13 en route to Macau, when two women approached him and allegedly poisoned him. It is disputed whether it was by injection or through a cloth held to his face.

He immediately asked for help at a nearby information desk and was transported to a clinic inside the airport, complaining of a headache. He died on his way to a nearby hospital in an airport ambulance car.

The two suspects immediately left the departure hall after the alleged attack and grabbed a taxi.