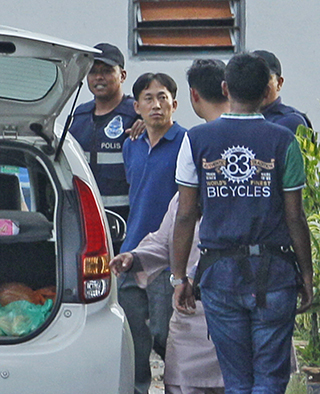 Malaysian police have arrested a third suspect in connection with the assassination of Kim Jong-nam. Authorities have identified him as a 46-year-old North Korean man named Ri Jong-chol. [YONHAP]

The man, Ri Jong-chol, is the third prime suspect to be apprehended after a 28-year-old woman with a Vietnamese travel document was arrested Wednesday morning and a 25-year-old woman with an Indonesian passport was taken into custody Thursday morning. It remains unclear whether the women are citizens of their respective country.

Malaysian police said they made the third arrest on Friday in Selangor, a region that surrounds the capital of Kuala Lumpur. They presume Ri was involved in the killing of Kim Jong-nam on Monday morning at Kuala Lumpur International Airport. A document issued by the Malaysian government to foreigners residing in the country on a work permit showed he was North Korean, police said, though it is unclear if the document is authentic.

Although authorities said he was arrested in Selangor, The Star, a media outlet in Malaysia, citing unnamed sources, reported that Ri was in a condominium in Jalan Kuchai Lama, a major road in Kuala Lumpur, at about 11 p.m. Friday when police raided the residence.

According to The Star’s sources, Ri was from Pyongyang and studied science and medicine at a North Korean university. He graduated in 2000 and "has expertise in chemistry,” they said.

About 10 years after graduating from college, Ri worked at a research center in Kolkata, India, until 2011, then returned to Pyongyang and received an offer to work for an IT company based in Malaysia, The Star reported. It did not say whether he actually accepted the work or how long he had been staying in Malaysia.

Officials from the North Korean Embassy in Malaysia requested they personally meet him, but police rejected the request, according to The Star.

The authorities said they are on the lookout for three more male suspects all between the ages of 30 and 50.