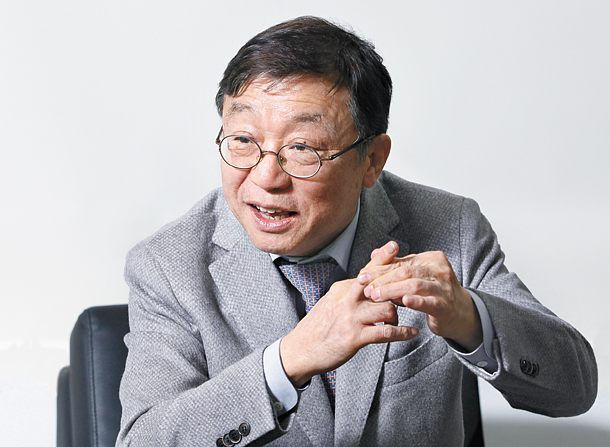 University of Ulsan President Oh Yeon-cheon sits for an interview on Wednesday at the Korea JoongAng Daily office in central Seoul. [PARK SANG-MOON]

University of Ulsan President Oh Yeon-cheon is calling for a paradigm shift in how universities and companies collaborate, enabling a constructive codependency between academia and industry.

“Up until now, university-industry cooperation has been labeled a friendly relationship, born out of companies’ corporate social responsibility and universities’ financial difficulties,” said the 66-year-old Oh in an interview with the Korea JoongAng Daily at the newspaper’s office in central Seoul Wednesday.

“But I say universities and business have to go together and rise together. This does not signify that the current status has to be overturned, but I believe there needs to be a paradigm shift toward universities and companies collaborating jointly for future value creation.

“Companies need to constantly ask universities for the kind of talent they need in the future,” he continued, which will also addresses the youth unemployment problem. “This needs to be reflected in the curricula, to advance learning, and based on this model, a picture of the future of industry can be envisioned and a detailed plan on how to implement this in detail can be drawn up. We need to be future-minded and see the long-term plan.”

He added, “And our goal is for Korean universities in to play a leading role in this process to collect and expand such understanding of university-industry cooperation in Asia.”

The University of Ulsan will host the Times Higher Education’s Asia Universities Summit, which will bring together heads of leading universities worldwide, as well as Asian universities, government officials and business leaders in Korea’s industrial capital from March 14 to 16.

An inaugural summit was hosted last June by the Hong Kong University of Science and Technology and brought together 260 delegates from over 25 countries.

This year, around 250 leaders of higher education from 35 countries are expected to attend the conference, which has the theme “Forging the future: Building stronger alliances between university and industry,” to discuss sustainable development of universities, technology and the economy.

The University of Ulsan, a private institution founded in 1970, is known for its strong medicine and engineering departments. It has been focusing on the field of bio-convergence and also engages in industry-academia cooperation with corporations such as Hyundai Heavy Industries, Hyundai Motor, SK Energy and S-oil.

The school beat out other competitors such as Tokyo to host the Asia Universities Summit last June.

“I think the reason we were selected was firstly because of Ulsan’s unique economic and industrial environment and the University of Ulsan’s role in the region, the industrial conditions surrounding Ulsan and the passion of the school’s leadership,” said Oh. “So we hope this will be a meaningful opportunity to raise awareness of Korea and our universities in the world.”

Oh served as president of Seoul National University (SNU) between 2010 and 2014.

Oh graduated from Gyeonggi High School and pursued a degree in political science at SNU. After passing the civil service exam, Oh obtained his master’s and doctorate degrees in financial management from New York University.

Q. The Asia Universities Summit will be hosted at the University of Ulsan in March. How was the university selected over universities in Tokyo and other competing cities?

A. Originally, the conference was in discussions to be held in Japan. We heard of the Asia Universities Summit and conveyed to Times Higher Education executives that we would like to host it either in Seoul or Ulsan. We said we have many universities that hold global values. Japanese universities are already well-known to Western countries, but our universities should be better known. A month or two later, an on-site evaluation team arrived to review whether the conference could be held here and checked if the Ulsan region had the appropriate infrastructure, such as accommodations and transportation. I think our passion and integrity helped our school be selected. Our determination was buoyed by the fact that this year marks the 20th anniversary of Ulsan attaining its status as a metropolitan city, thus the Ulsan city government also has had a strong reason to commemorate this anniversary.

The university is known for prioritizing cooperation between academia and industry. Will this be a topic at the upcoming summit?

University-industry cooperation is still mistaken by society as universities simply receiving unilateral support from companies. But I believe this is not quite accurate. The university and industry cooperation that will unfold in the future is the fundamental key for companies and universities to create new values in communities. It should not be a passive form, such as a method of financial support for universities or part of corporate social responsibility. University professors need to create new economic, cultural and industrial values, while students have to learn these in their studies and companies have to use these to invigorate their businesses. What is most important for companies and universities alike is passion, meeting challenges and dedication, which is vital especially in business and academic relations. Because when this comes into full bloom, companies, universities and the community all advance.

What are some successful cases in Ulsan of university-industry collaboration?

I don’t think it would be an exaggeration to say that there is no place where industry is flourishing like Ulsan. Ulsan has a population of 1.2 million but it is the center of Korea’s chemical industry, and there is also the auto industry and heavy industry. The proximity of these three industrial areas enables students to easily access their factories and learn their technologies. While Koreans takes this for granted, when leaders of U.S. or European universities visit, they are very envious because they have very few schools located in such a favorable way. Field training is especially essential in the education process. And students also need to plan for their futures early on. It is essential to create an environment that students can plan for the future and that the companies truly have a desire for university-industry cooperation - to take in university students with the idea that they will train them into future talents.

During a time of high youth unemployment, the University of Ulsan has ranked in the top 10 in employment of university graduates. What is the school’s employment strategy?

The favorable statistics largely reflect our students’ efforts. But such efforts include students setting detailed goals and using their energy to attain employment from early on. Also, the surrounding environment provides many opportunities for experience. Companies are next door, and students can be motivated from early on.

You have experience as president of SNU. What has this experience brought to your role at the University of Ulsan?

As SNU president, as a national university president, I had unlimited responsibility and learned to devote all my energy and resources to the role. And the more important aspect in university leadership is how to hold a dialogue and widen understanding with those with opposing views and also listen courteously. Decisions made at SNU were not just for the university but set precedents for Korea’s higher education and intellectual community and thus held national interest. Thus we had to be prudent but also convey a meaningful message to universities and academic circles in Korea. SNU is an academic institution that has a complex political nature - and I was trained in such a place for four years, which was helpful when going to a rural private university. Finances at SNU were very stable because it was a national university. Private universities are dependent on tuition so the fiscal condition is getting worse in general.

Last year you published “Leadership of Decision” based on your experiences helming SNU. What advice do you have for future young leaders?

First is to have honesty and humility. We need to believe humility is not simply decorum but the essence of humanity. That is why we try to learn. Prejudice and bias is a result of our failure to abandon our pride. And we need to put effort into supplementing what we lack, to be able understand each other and respect other opinions. As an extension of this posture of humility, I think the most important ability of a leader in the 21st century is the ability to communicate and listen courteously and draw a solution out of that, whether it is in enterprises, government, universities or the press, to widen consensus.

You are at the midpoint of your term as president of University of Ulsan. What is your most significant accomplishment and your biggest goal for your remaining years?

I am but a president who sits for several years at the university, but I want for the overall higher education standard in Korea to be raised and for an increase in their contributions to society, to share, participate and raise issues in this process. But what I believe is my biggest task at the University of Ulsan and in large at other regional universities nationwide is to break the chronic sense of being second-class and the self-inflected defeatism. I do not believe in this at all. You have to work harder if you didn’t go to SKY [an acronym for Korea’s three top universities: Seoul National, Korea and Yonsei universities]. I believe there is more room for advancement because you didn’t go to SKY because you are more humble. You have to become the owner of yourself and develop not only yourself but also contribute to your community.