At off-season tourist sites, an outbreak of Pokemon fever

At off-season tourist sites, an outbreak of Pokemon fever 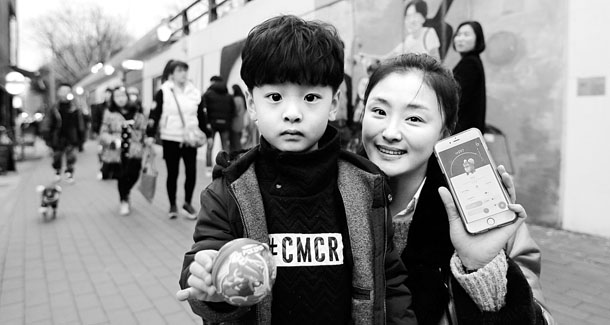 Pokemon enthusiast Bae Ji-yeong is at Kim Gwangseok Street in Daegu with her son, showing off the Pokemon they caught. [GONG JEONG-SIK]

Cries rang out at Nami Island in Gangwon on Saturday, and Pokemon Go was the culprit. When word spread of rare characters such as Dragonite, Golduck and Bulbasaur being clustered around 80 Poke Stops, real-life locations where players can receive free game items, enthusiasts swarmed in.

“A while ago, we had 5,000-6,000 visitors a day,” said Jeong Jae-u, public relations staff at Nami Island, “and over half were foreigners. But after being lit up as a Pokemon Mecca, the ratio of [Koreans] has greatly increased.”

Since Pokemon Go started service in Korea on Jan. 24, enthusiasts have been gathering around posegwon, a portmanteau of Poke Stop and yeoksaegwon, or railway station areas. When the weekend arrives, places that are known to have rare Pokemon are inundated with people. Tourist areas affected adversely by the economic downturn and winter off-season are finding solace in the new trend.

“Up until now, I came out when customers got off work, but now there are so many people I start work early,” said Cha Hye-suk, 59, a fish-shaped pastry vender at Incheon Central Park.

The Hwawon Recreation Area at Hwawon-eup in Dalseong County, Daegu, is far from the city center, but now people visit at all hours. The number of daily visitors to Busan Citizens Park is usually about 7,000, but starting Feb. 4, it broke 61,448 several days in a row.

When word spread that the Busan United Nations Memorial Cemetery, where Korean War veterans are buried, was a good place for game play, visitors increased from the usual 500 daily visitors to about 2,000.

On the day of Pokemon Go’s release, the Busan Infrastructure Corporation posted on its Facebook account that 30 types of characters could be caught at Busan Citizen Park. Reflecting on the battery drainage by the game on cellphones, there are plans with wireless carriers to lend out batteries for free.

Local governments, such as Sejong and Busan, universities, and public institutions are actively indicating specific Poke Stops on the internet. Places such as Incheon, Donghae, Gangwon, Hamyang County in South Gyeongsang and Hongseong County in South Chungcheong are preparing businesses that connect spawn locations and tourist areas.

However, not all are pleased at the change in circumstance. Nearby residents of posegwons are beginning to complain of noise pollution and privacy violations resulting from the influx of players. Recently, 20 people were caught by police scaling the Busan United Nations Memorial Cemetery wall at night.

There are also concerns of traffic violations resulting from Pokemon fever. Traffic officers at the Haenam police department in South Jeolla have downloaded Pokemon Go as the spawn locations appear to correspond with many areas considered vulnerable to crime. The police department is focusing on cracking down on cellphone use while driving for the month of February. If caught using a cellphone, a fine of 60,000 won ($52) and a penalty points of 15 points (standard vehicle) on the driver’s license will be imposed.

The Daejeon National Cemetery at Yuseong District, Daejeon is similarly struggling. “This is a place of rest for those who sacrificed their lives for the country,” said one visitor. “I think a mature civic consciousness in refraining from gaming is necessary.”

Nevertheless, it seems for most, the surge in foot traffic is considered a boon rather than a curse. The only caveat is continued sustainability.

“The popularity of Pokemon Go may be sky-high right now, but like other countries, one doesn’t know when it’ll stop,” said Lee Choong-ki, professor of tourism at Kyung Hee University. “Long-term tourism programs to stay around and consume should be made, not just for going around and catching Pokemon.”