Korea continues to win medals during the second day at the 2017 Sapporo Winter Asian Games.

With the PyeongChang Winter Olympics approaching in less than a year, Korean athletes continue to win medals at the Sapporo Asian Winter Games, the last major international competition before the Olympics.

Lee Sang-ho, alpine snowboarder, started the day by winning his second event in men’s slalom race with combined time of 1:16.09 after two races at Sapporo Teine.

Not only was he the first to win a gold medal for Korea, Lee also became the first athlete to win two events in this year’s Asian Games. 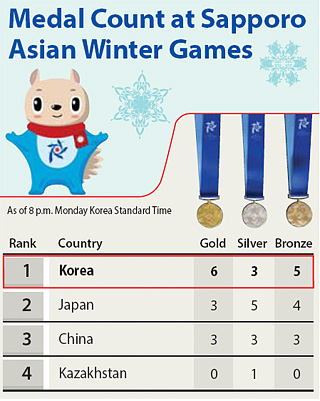 In the event, Kim Sang-gyum earned bronze at 1:17.42, but Choi Bo-gun, silver medalist in the giant slalom, finished fourth in the race. In women’s alpine snowboarding, Shin Da-hae won a bronze medal in the women’s slalom.

Despite limited training time at the Makomania Indoor Ice Rink, Korea started off strong in short track speed skating as they captured two gold medals on Monday. They were given 70 minutes total in training over Saturday and Sunday.

In the women’s race, Choi Min-jeong took home gold in the 1500-meter race.

Although Choi is considered as one of the world’s top short track skaters, Choi failed to capture gold in a 1500-meter race during the 2016/17 season. Choi performed better in the women’s 1000-meter event as she won two gold medals at the World Championships this season.

On the other hand, Shim’s runner-up finish in the 1500-meter race was quite a surprise since she is the world’s top ranked skater in the category.

The result of the men’s race was also a surprise as the two-time Olympic gold medalist Lee Jung-su won a bronze medal.

Park has never won gold or silver in a 1500-meter race and has not won a World Cup race this season.

Both Park and Lee will compete in the 500-meter race on Tuesday for a chance to win another gold at the Asian Games.