Team Kim ready to represent Korea on the ice

Team Kim ready to represent Korea on the ice 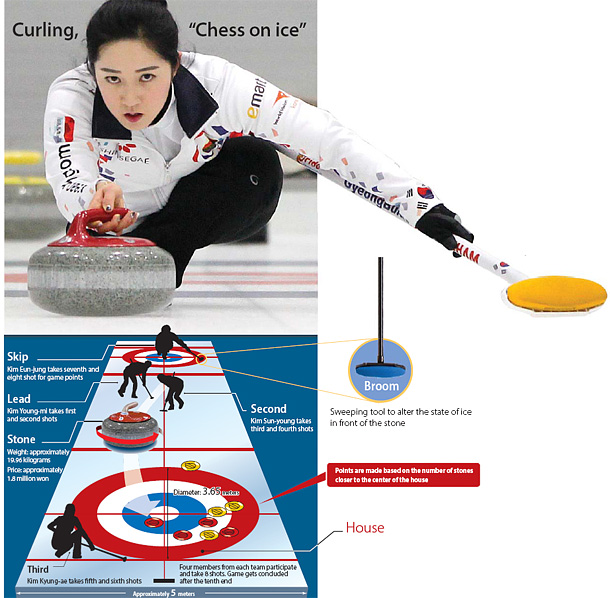 Whenever the Korean women’s curling team competes in international events, many ask if they are a family. Including the skip, Kim Eun-jung, all of the members on the team, Kim Young-mi, Kim Seon-young, Kim Kyung-ae and Kim Cho-hi have the same surname.

In addition, head coach Kim Kyung-du and the coach Kim Min-jung also have the same last name. Many people think that they are a family, but only Kim Young-mi and Kim Kyung-ae are related.

“When we tell [non-Koreans] that we all have the same last name, they seem confused,” Kim Kyung-ae said.

Since curling teams’ names are created based on their skip’s last name, the Korean national women’s curling team’s name is “Team Kim.” 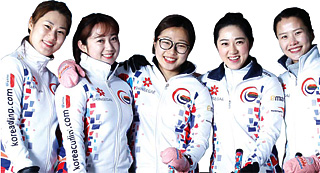 From left, coach Kim Min-jung, Kim Young-mi, Kim Seon-young, Kim Kyung-ae and Kim Eun-jung. Many people think they are a family as they all wear the name Kim on the back of their jackets. Team Kim hopes to win the Asian Games and compete at the PyeongChang Olympics. [JOONGANG ILBO]

Curling, also known as “chess on ice,” is a sport where one player slides a stone on a sheet of ice towards a target while the other three sweep to alter the ice in front of the stone.

Unlike other sports, curling selects one team rather than five different individuals to compete for the national team, as the sport requires significant teamwork.

The women’s team representing Korea at the Sapporo Asian Winter Games is a part of North Gyeongsang Sports Council.

They all started curling when Uiseong Curling Club in Gangwon first launched in 2006. As students attending Uiseong Girls Middle and High School at the time, they started curling as a hobby.

“I started curling as an after-school activity with Eun-jung,” Kim Young-mi said. “Kyung-ae, my sister, started unexpectedly when she visited the curling club. After, Kyung-ae’s friend joined and the team was complete with the inclusion of Cho-hi in 2015.”

Now, the team has no secrets between each other as they live in the same apartment and train together.

After the team missed their spot on to compete in the 2014 Sochi Winter Olympics, they worked harder to produce better results.

“We’ve won seven times against Gyeonggi Province, but we lost one game to the team at the national team qualification game,” Kim Min-jung said. “Because of that one loss, we couldn’t compete at the Sochi Olympics.”

During the 2014 Sochi Olympics, the Korean women’s curling team finished eighth, with the record of three wins and six losses, out of ten teams.

“I thought of quitting when we missed out spot to compete at the Olympics,” Kim Eun-jung said. “But after watching the Sochi Olympics on television, it motivated me to work harder.”

In 2016, Team Kim won the Pacific-Asia Curling Championship and in 2015, they won against Canada’s Team Johnson, 2014 Sochi Olympics gold medalists.

With that, the team has been ranked as high as ninth in the world.

The Korean women’s curling will automatically be qualified to compete at the PyeongChang Olympics as Korea is hosting the Games.

Starting in May, the team will be selected through three different national team selection games.

At the Asian Games, the team will be competing against five different countries including China, bronze medalist at the Sochi Olympics, and Japan, runner-up at the 2016 World Curling Championship.

“I want to win the Asian Games and play in the PyeongChang Olympics,” Kim Kyung-ae said.

The team has won two of its matches in the Asian Games so far and will play against Kazakhstan today at the Sapporo Curling Stadium.