Artist captures the struggles of Korean office life : Yang Kyung-soo’s work has resonated in the time of Hell Joseon

Artist captures the struggles of Korean office life : Yang Kyung-soo’s work has resonated in the time of Hell Joseon 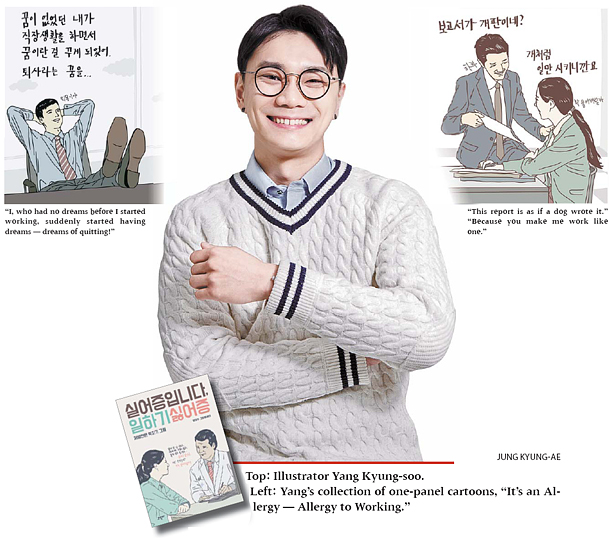 On a day where I wanted to get off work as soon as I checked in, a picture on social media caught my attention. A neatly dressed man reminiscent of an illustration published by a public institution was in his office saying the words “I, who had no dreams before I started working, suddenly started having dreams - dreams of quitting!” Holding back my laughter, I searched for other illustrations but I couldn’t hold back any longer, and burst into laughter. More relatable illustrations and captions that only got wittier kept me laughing. It was enjoyable, but deep down it was a satire on Korea’s unique office culture and strong advocacy for worker’s rights.

The works were from a collection of one-panel cartoons by artist Yang Kyung-soo - pen name Yangchikii, - called “It’s an Allergy - an Allergy to Working.” (In the Korean title, the author uses the Korean word sileojeung, which means both the loss of the ability to speak, and not wanting to do things - for an intended pun.)

Ranked second in the average working hours among OECD members, Korea has been infamously nicknamed Hell Joseon by young people who claim that living in Korea is like living in hell. The book, which sympathizes with those working in what they see as Hell Joseon, has printed six editions in the two months since its release.

Yang first caught the eyes of fans after illustrating for Japanese writer Hino Eitaro’s Korean translation of the book, “I Don’t Need to be Fruitful, Just Give Me My Overtime Payment,” and has made a name for himself with his own webtoon series and by illustrating for various commercials and television dramas. Interestingly, he has no experience working in an office environment. He has an unusual profile, majoring in painting at Chugye University for the Arts, and working as a contemporary Buddhist artist. He also delved in interior design in his twenties, worked as a mural painter, and has experience in the social commerce industry, driving and much more - totaling to approximately 10 occupations. That’s why I decided to meet him.

Q.You must be very busy - you even have your very own schedule manager.

A. I have received more than one hundred requests for advertisements. I had no time to illustrate because I had to answer calls from almost all of the conglomerates putting in requests. That’s why I asked a close friend of mine to act as my manager.

You really are a star right now. Why do you think your work is so hot?

The first, second and third factor is sympathy. My style of drawing is quite bland, but the way I drew a sympathizing narrative in a single frame was something that clicked with my readers.

I guess you’re right. I recently gave a copy of the book to a senior at work who did not seem to know much about webtoons. He read it all in one sitting, laughing all the way.

The original intent was to create a piece that is funny, but one that also displays the joys and sorrows of life, much like the “Deong Dari Series” or the “Choi Bool Am Series.” I wanted to create a book that one can read on the toilet - something that only takes twenty to thirty minutes to complete and something that makes sense on whatever page you open to. In a time when everything is so serious, I believe that smiling and laughing are valuable things.

As funny as it is, a lot of the praise is due to the work’s satire of the unique and strict hierarchy-based office culture and the people who are on the top of that structure.

That’s true. I believe that there will always be a Choi Soon-sil in any organization, attempting to push people around with what little, petty authority they have.

In the past when we didn’t know better, we would do as we were told, but in this age of the internet, individuals have gotten smarter, and have the knowledge to distinguish between what is right and what is unreasonable.

I guess the notion of wanting to lead a happy life has advanced our culture into resisting these unreasonable influences and people exerting unreasonable power through authority.

I hear you get your ideas from your peers working in offices. What needs to change for them to feel satisfied?

The hierarchy and the culture in the office won’t change. What’s more important is what happens five, ten years later when we are at higher positions. I want them to think “I won’t be like them when I’m up there,” because when you use your authority to push people around, you end up lonely, and the aftermath isn’t that bright. I really like the anime “One Piece” by Eiichiro Oda. The protagonist isn’t a person in power. It’s someone that achieved his goals through adventures and having fun with his colleagues. There’s something that makes our life richer.

I agree with you. Even as someone that hates those in power using their authority in the wrong way, sometimes I’m shocked when I see myself doing those things to my junior colleagues.

You need to keep reminding yourself of what you’re doing to the people around you. Just because they’re young doesn’t mean that they don’t have the necessary skills. It only means that they are not as experienced as you.

Your work is reminiscent of another office webtoon, Yoon Tae-ho’s “Misaeng,” but carries a different nuance. “Misaeng” makes me want to work harder, while your work makes me want to quit my job.

Is that so? Of course, quitting is never the answer. But that doesn’t mean that your workplace is the answer as well. Do you know what the definition of an occupation is? It is something that you do in order to maintain livelihood, but what’s more important is something that is in accord with your abilities and aptitude. We are taught to think that finding out our abilities and aptitude is a waste of time. But I believe spending time for yourself is never a waste of time. Anything that doesn’t concern you is a waste of time.

You are currently doing a series on Naver Webtoon, on portal site Naver, of events that happen in jobs and have narrowed down narratives on occupations, such as stewardesses, firefighters and delivery men.

Even if you’re at a low position at your office, you suddenly think you’re at a higher position when talking to a delivery man. That’s life in Korea for you. I had a chance to visit Norway and Sweden for Buddhist art exhibitions, but all occupations were honorable there.

That’s why I thought if I could discuss the joys and sorrows each distinct occupation carries and share it through my illustrations, it could give them the opportunity to understand each other better.

You chose to illustrate occupations which are regarded as being lower in class.

That was intentional. I didn’t rank the occupations, but I chose to illustrate jobs that are regarded as hard or tiresome. I interviewed many of the workers - stewardesses for example, look as if they lead a happy life, but nobody really knows of the hardships they go through behind the scenes. The sense of duty of firefighters was also tremendous. They don’t even think about “I’m scared of fires” or “what if I get hurt.” All they care about is “what if I can’t save another soul.” That’s why I drew the piece with the firefighters without any sense of humor.

What would the joys and sorrows of a webtoon artist be if you were to illustrate one?

Sleep deprivation will be one of them. I sleep for three to four hours a day, but even during that time I have to constantly worry about new ideas. Even right now as I see you typing I think of the pain in your fingers.

“Does she type even if she’s with her friends?” - that’s what’s going through my mind right now.

Won’t you get a case of “Allergy to working” with that stress?

Soon as the money comes in the stress is over. Whenever I get interviewed I seem to talk about money a lot. There’s a lot of people that rake in money unjustly, so I really believe it is valuable being able to earn money with the abilities one has.

For the past ten years, I have been told “how are you going to make a living through drawing” or “you need to find a job if you’re going to compromise with reality.” For seven years, I worked as a one-man company in interior design making a living and paying for my tuition. Even then, I never gave up drawing - I kept what was most valuable to me even through trying circumstances.

I heard you applied for the department of painting in rebellion to your parents who are Buddhist artists. You also were praised for your modern interpretation of Buddhist art and held an exhibition in Europe.

Ultimately my identity lied in Buddhism. Buddha is an enlightened individual. If one wants to be a Buddha-like person, one has to regard and treat others as Buddha as well. Control oneself, don’t lie and don’t hurt others. This is the essence of Buddhism. [His pen name, Yangchikii, is an ideal meaning “to control oneself” that is a major part of Buddhism.]

There is a reason why CEOs in the Western world including Mark Zuckerberg are absorbed in Buddhism. The adage of “follow the leader” doesn’t work anymore. I believe everyone needs to be smarter for the company to move ahead, CEOs included. That is in accord with the philosophy of Buddhism, and my illustrations as well.

You seem to be always on the move, planning in advance and have inexhaustible number of ideas. What’s the next step?

I’m planning to open a Facebook page with the name “Yangchikii Pirates,” uploading illustrations or short clips every day that play well on social media. It’s not a structure where we’ll get much in terms of profit, but I will pay my colleagues for their work. I want to support colleagues that have their own character, who are diligent and full of potential. It’s more of an investment of sorts, I want to up the stakes in social media contents.

What will Yang Kyung-soo draw?

I will be illustrating what’s really in the minds of cats and dogs. For example, “why does the Shiba Inu get so much hate in Korea?” It will be released in February. I promise it will be fun.