Step up, step off

Step up, step off 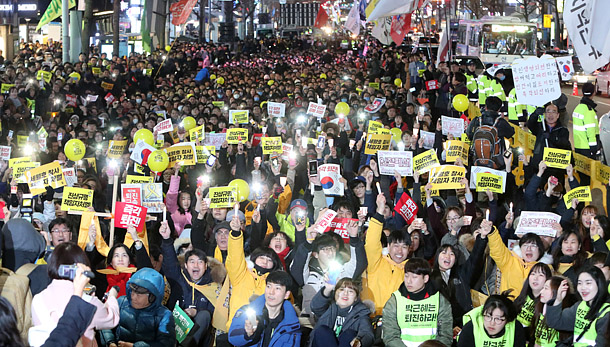 Protesters in Busan call for President Park Geun-hye to step down. [Yonhap]

Consider the idea of President Park Geun-hye resigning this week. Feb. 25 marks the fourth anniversary of her inauguration and seems like the appropriate time to step down. It is also the last day special prosecutors can request an extension of their investigation into the president.

If she does not make a decision by then, there is no way to stop the Constitutional Court from ruling to imprison the sitting president. Does she really think the court will overturn the National Assembly’s impeachment? There seems to be a small chance, if any at all.

Before his retirement from the bench, Chief Justice Park Han-chul gave the court a deadline of March 13 for the ruling. There was reason for his ultimatum. Impeachment can still pass even if two of the justices dismiss it.

Some might think the former chief justice lacks neutrality, but that is not true. He made such a decision as the authority in charge of upholding the nation’s constitution. The day the court makes its final ruling on impeachment will be a critical moment for Korea. The ruling could get this country back on the right track, or it could portend a period of anarchy.

On Saturday, two very different demonstrations took place in central Seoul, one opposing the president and one in support. It is a telltale sign that the country is in a near state of civil war.

Does the president only see those who root for her? Is she content with those demonstrations because they are gaining traction? There are still more people raising their voices in support of impeachment and even more at home with impeachment on their mind. These people are neither pro-North Korea nor supporters of Moon Jae-in, one of the leading opposition presidential contenders. A majority of them are ordinary people who respect the law and common sense.

President Park is taking every possible legitimate step to overturn her impeachment, and some have worked. But from a rational point of view, she is going against the grain. I know how she feels. She probably thinks things are unfair because many of her predecessors, who committed serious crimes, successfully finished their terms.

But times have changed. The public’s consciousness is not the same as before. The people are not living by the standards of the past and will not allow certain powers to run rampant. Political figures should follow the zeitgeist whether they like it or not. That is how the country will retain its democratic state.

But even if Park stands against the Constitutional Court until the end and gets thrown out of office, this unfortunate event will divide the entire nation. The two parties will begin their war — the people calling for Park’s imprisonment versus the opposition’s opposition. The public will become exhausted by the extreme political strife, and the country will eventually fall to the ground. Is this what President Park wants?

I am also appealing to Moon Jae-in and other opposition parties. They should agree to stop all judicial procedures targeting President Park if she steps down this month so that a presidential election can happen within 60 days of her resignation.

Whether it is true or not, it is a serious crime for Park to collude with her confidante Choi Soon-sil and influence state affairs. But there are also a handsome number of people who do not believe all the allegations of Park’s misdeeds with Choi.

Some people think Park committed wrongdoings but does not deserved to be impeached. When these people see the president clad in prison uniform with handcuffs on her hands, they will seethe with aggression and anger toward the opposition party. With these people around, the next president will waste his term confronting conservatives and will likely to leave the Blue House with few achievements.

There is only one answer. If President Park admits political responsibility for this unprecedented abuse of power scandal and resigns by the end of this month, the four major presidential contenders should agree to enact a special law to stop all judicial measures against her.

I especially have high hopes for Moon because he is the person who can do it. He must do it. This is the chance for him to prove his ability as a political figure who can unite different ideologies.