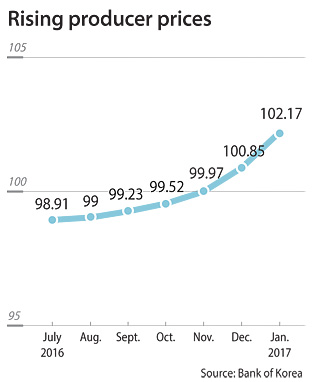 Producer prices in Korea rose the fastest on a monthly basis in six years due to the rise in commodities such as crude oil and iron ore, as well as a hike in fresh egg prices after an outbreak of avian influenza.

According to the Bank of Korea Monday, the producer price index rose 1.3 percent from 100.85 in December to 102.17 in January. The index is calculated from a base of 100, which represents average prices in 2010. A reading above 100 means producer prices rose compared to the average in 2010, while a reading below shows that prices dropped.

The index rose to its highest level since December 2014 when it hit 103.11 and rose for the sixth consecutive month. The 1.3 percent month on month growth is the highest jump in six years or since the 1.5 percent recorded in January 2011. When compared to the previous year, the index rose 3.7 percent.

Coal and petrochemical prices rose 8.5 percent from the previous month and those of livestock products increased 6.3 percent, according to the BOK.

By type, prices of eggs jumped 40.9 percent in January from the previous month and 113.5 percent when compared to the previous year. Egg prices have stabilized a bit after the AI outbreak came to an end, but they are expected to remain high for a period as more than 30 million birds were culled.

Producer prices are set by the manufacturers before they distributed products. The central bank releases data based on 820 products sold in the country.