Naver gets green light to test autonomous vehicle on road

Naver gets green light to test autonomous vehicle on road 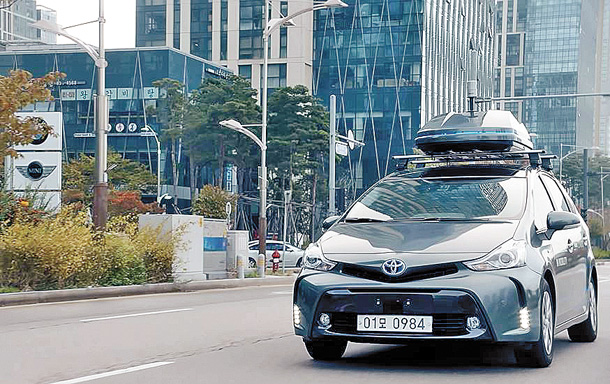 It won’t be long before autonomous cars developed by a research and development arm of Naver will be running on Korean roads.
The Ministry of Land, Infrastructure and Transport said on Monday it issued an approval for Naver Labs to “temporarily” operate self-driving vehicles.

The Naver subsidiary is the first tech company in Korea to obtain the license from the transportation authority. The ministry launched a system in February last year to issue temporary operation licenses for autonomous cars for experiments and research. Since then, eight companies and laboratories, including top automaker Hyundai Motor and Seoul National University, have received a green light from the ministry. Cars that have received approval for temporary operation can run on all roads across the nation except for in school zones.
“The approval means our autopilot technology, which we unveiled at the Deview 2016 [in October], has attained a level sufficient for real-road experimentation,” Naver Labs said in a statement.

Naver Labs, which was spun off from its mother company Naver on Jan. 2, runs a group devoted entirely to autonomous vehicles called Mobility Team, and has been studying autopilot technologies and advanced driver assistant systems as it seeks to advance in “ambient intelligence,” or electronic environments that are sensitive and responsive to the presence of people. Naver’s Papago, a multilingual translation and interpretation app released last year, also constitutes a key pillar of the vision, and Naver Labs is expected to use the autonomous driving technology for car-sharing, at first.

The Naver subsidiary has been experimenting with autopilot on Toyota’s hybrid Prius V and the Land Ministry’s approval will allow the cars to compile and analyze data under real-road situations, thus improving the technology.

Naver Labs’ self-driving technology currently stands between Level 3 and 4, according to its insiders, even though the company has never acknowledged it. Under Level 3, the driver may safely turn away from driving tasks but must still be prepared to take control when necessary, while Level 4 allows the driver to control the vehicle in nearly all circumstances.

The company will set up a booth and unveil the status of its autopilot development at the 2017 edition of Seoul Motor Show that kicks off March 31, using Prius V as a prototype vehicle. Naver is set to become the first tech firm in Korea to showcase at the motor show.
The Land Ministry has set a goal to commercialize autonomous vehicles at Level 3 or above by 2020, mending related regulations and building infrastructure. It will host a hearing on Feb. 22 with those autopilot developers that have obtained real-road operation licenses to receive feedback.