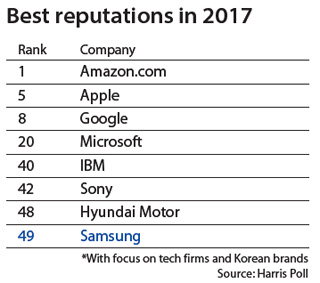 Samsung’s corporate reputation nosedived from seventh in the world to 49th, according to a recent U.S. survey of the 100 most visible companies in the world.

The 2017 Harris Poll Reputation Quotient study showed the Korean tech giant fell well behind other IT giants such as Amazon.com, which captured the top spot, as well as Apple, Google, Microsoft and Sony. Even Hyundai Motor was ahead of Samsung by one slot in the 48th position.

Just a few months after the massive recall and discontinuation of its fire-prone Galaxy Note7 smartphone last year, Samsung’s de facto leader and Vice Chairman Lee Jae-yong became the first Korean chaebol chief ever to be arrested on bribery charges.

The only son of incapacitated Samsung patriarch Lee Kun-hee was seen handcuffed and with his arms tied with white rope as he appeared at an independent counsel’s office over the weekend for questioning, further denting the image of a company that remains the world’s No. 1 TV vendor and a major smartphone manufacturer.

Samsung took the seventh spot in the survey last year and was the sole non-American company in the top 10. Amazon.com was No. 1, followed by Apple and Google. Korea’s most valuable company advanced from 13th in 2012 to 11th in 2013, seventh in 2014 and to as high as third in 2015 - above Google and Apple.

Since it started in 1999, the annual survey has become a top measure of corporate reputations. The 2017 survey was conducted online in English among 30,519 adults aged 18 and older between Nov. 28 and Dec. 16 last year. All respondents were asked to name companies that stand out as having the best and worst reputations overall and were asked to rate perceptions in six dimensions of corporate reputation: social responsibility, vision and leadership, financial performance, products and services, emotional appeal and workplace environment.

Despite the report, shares of Samsung Electronics surged 2.11 percent to close at 1,933,000 won ($1,686) on Monday, buoyed by analysts’ view that its fundamentals count more than any risk coming from the legal woes of Lee.

Patrick Moorhead, president and principal analyst at Moor Insights & Strategy, was quoted as saying by CNBC last Friday that while there was nothing positive about Lee facing arrest and indictment, there was one silver lining for Samsung - Lee is “not the global face” of the brand.

“Mr. Lee, globally, isn’t aligned with the global brand and consumers, and he’s not really involved in the day-to-day activities,” Moorhead said, adding Samsung followed a stovepipe organizational structure where each unit is a business itself.

Harman International’s shareholders voted last Friday in favor of Samsung’s acquisition of the American automotive component and audio supplier. The vote paved the way for the $8 billion deal to be done by September.