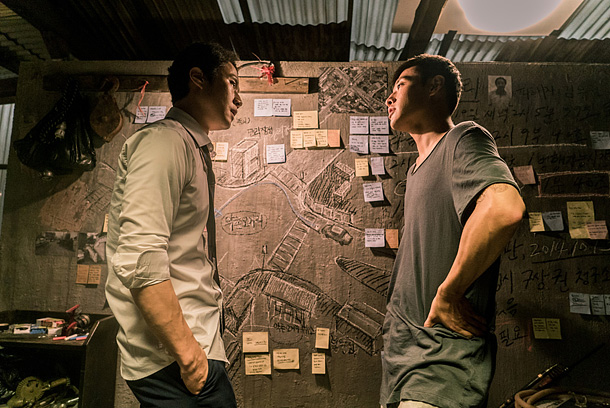 “New Trial” debuted in the top spot on Wednesday, and held on to the lead over the weekend. [OPUS PICTURES]

“New Trial” pushed away “Fabricated City” to take the top spot at the local box office over the weekend. Directed by Kim Tae-yun of “Another Family” (2014), “New Trial” features Jung Woo as a lawyer who offers a retrial to Kang Ha-neul’s character who was falsely convicted and served a 10-year sentence after being forced to make a false confession. The film, based on a true incident, has maintained the top spot since its release on Wednesday, and sold 755,000 tickets at 935 screens from Friday to Sunday, accounting for 34 percent of the entire ticket sales for the weekend. In total, it has sold more than a million tickets, raking in 8.38 billion won ($7.5 million) in total.

The action flick “Fabricated City” dropped a spot in its second weekend. Director Park Kwang-hyun’s film about a jobless-yet-skilled gamer trying to clear himself of false criminal charges with the help of fellow gamers sold 463,000 tickets over the weekend, raking in an accumulated 1.97 million ticket sales since it hit theaters nationwide on Feb. 9.

It remains to be seen how much longer the aforementioned films will hold on to their ranks when two star-studded films, “Lucid Dream” and “A Single Rider,” hit theaters on Wednesday.

Despite harsh reviews from foreign media, “The Great Wall,” about historical monsters, debuted in third, which arrived to a total 371,000 admissions in sale since it was unveiled on Wednesday. Directed by Chinese filmmaker Zhang Yimou of “House of Flying Daggers” (2004) and starring Matt Damon, critics described the film, which is the most expensive China-U.S. co-production to date, costing over $150 million, as a lavish Chinese spectacle with a simplistic plot. 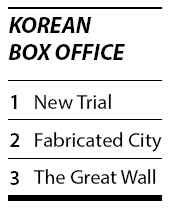 The animated film “Trolls” rounded out the top five. Featuring Justin Timberlake’s song “Can’t Stop the Feeling!” which is up for best original song for the upcoming 89th Academy Awards next week, it has sold 215,000 tickets since its debut on Thursday.