An gets over 20% support in an opinion poll

An gets over 20% support in an opinion poll 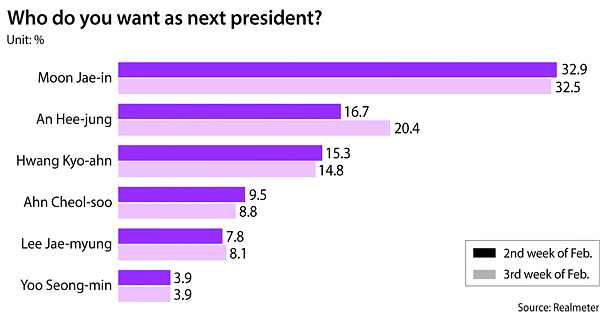 South Chungcheong Governor An Hee-jung’s approval rating for this year’s presidential race cracked the 20 percent range for the first time.

In a poll by Realmeter, An ranked second with 20.4 percent support, trailing frontrunner Moon Jae-in of the Democratic Party(DP) with 32.5 percent. While there is still a double digit gap between An and the former DP chairman, the poll is an encouraging sign for the 52-year-old governor. Analysts say a 20 percent level of support is the minimum level from which a No. 2 can catch up with a frontrunner.

Prime Minister Hwang Kyo-ahn, who is acting president, is supported by the ruling Liberty Korea Party and came in third with 14.8 percent. Hwang is backed by conservatives as the fate of impeached President Park Geun-hye hangs in the balance. Rep. Ahn Cheol-soo of the People’s Party followed with 8.8 percent as he struggles to expand a support base of center-to-right voters, many of whom support Governor An. Seongnam Mayor Lee, a democrat, came in fourth with 8.1 percent. Rep. Yoo Seong-min of the Bareun Party followed with 3.9 percent.

The poll was conducted between Monday through Friday on 2,521 adults nationwide with a margin of error of plus or minus 2 percentage points.

An’s strategy is to reach out to the center-to-right voters by advocating policies embraced by them and stressing the importance of bipartisan compromise. He supports the U.S.-operated missile defense system known as the Terminal High Altitude Area Defense (Thaad), which has drawn sharp protests from Beijing and is opposed by many liberals.

An claims Seoul’s decision to deploy the anti-missile system should not be scrapped because it was a bilateral agreement with Washington, a stance welcomed by national security-conscious conservatives, who worry that frontrunner Moon leans too much toward North Korea.

In the conservative Daegu and North Gyeongsang region, An’s approval rating exceeded Moon’s 21.3 to 20.6 percent. An’s rating among Chungcheong voters also surpassed Moon’s in 32.2 to 30 percent. An is a Chungcheong native and has led the South Cheongchung provincial government since 2010.

While An’s strategy of wooing moderates and conservatives seems to be working, analysts note that the support of voters outside the DP could backfire in a primary race against Moon. Liberal DP members disappointed with An’s recent tilt to the right could rally behind Moon and hand him the party nomination. Aware of this, An’s camp says he would be guaranteed to lose if he tilted further left to appeal to Moon’s supporters.

The An camp hopes that reaching the 20-percent range will show party members that An is a viable alternative to Moon.

In encouraging news for the DP, the combined approval ratings of its three presidential candidates - Moon, An and Seongnam Mayor Lee - was 61 percent in the Realmeter poll, breaking the 60 percent range for the first time and making it more likely that this year’s election will lead to a change of power from conservatives to liberals, who lost the Blue House in the 2007 presidential election and never reclaimed it.

A key to An capturing the party nomination is non-party members participating in its primary. The DP has decided to let non-party members cast votes and is expecting up to 2 million people to participate in the nomination process. Moon commands strong support from an estimated 195,000 party delegates and members, so An is expected to benefit from primary voters with no DP affiliation.

In more good news for the DP, both Moon and An were forecast to defeat potential rivals in a virtual three-way and two-way races.

In a virtual race with acting President Hwang and Rep. Ahn Cheol-soo, Moon led with 49.4 percent support, with Hwang and Ahn in distant second and third places with 20.3 and 15.5 percent.

In another virtual race, Governor An also came out on top with 51.4 percent, trailed by Hwang in distant second with 19.4 and Ahn in third with 17.2 percent. The virtual race poll was jointly conducted by the Kukmin Daily and Korea Society Opinion Institute.